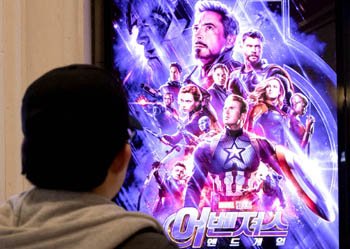 A man looks at a poster for the film "Avengers: Endgame" at a movie theater in Seoul on May 5. /Yonhap

"Avengers: Endgame" has attracted over 13 million viewers in just 22 days since its release, becoming the first foreign film to sell that many tickets since "Avatar" a decade ago.

Marvel's latest superhero blockbuster was watched by 13.01 million people as of Wednesday, according to the Korean Film Council, putting it on track to overtake "Avatar", which drew 13.34 million viewers in 2009, as the most successful foreign film ever shown in Korea.

"Avengers: Endgame" reached the milestone in the shortest span of time by a foreign film. "Avatar" needed 74 days to do so.

"Avengers: Endgame" depicts the Avenger team's final showdown with supervillain Thanos in the aftermath of the destruction wrought during the Infinity War.