'Insane' analyzes the honesty of media art on media 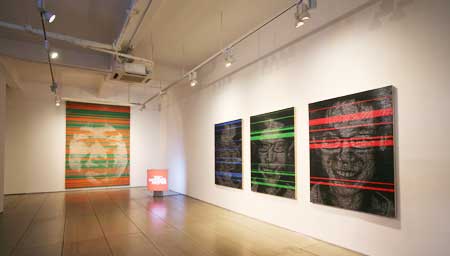 Could you go without TV, Twitter or a cell phone for a day? What about three months?

Artist Insane Park did exactly that in preparation for his solo exhibition "M.IDEA" at Arario Gallery, Sogyeok-dong, on display through Feb. 20.

The artist specializes in images comprised of industrial coaxial cables and car paint - simple acrylics too vulnerable to aging - in order to provide a well-known message of media mistrust through innovative methods.

Large-scale portraits cover the walls of the space, "flickering" as if on a static TV screen. Each picture is comprised of horizontally laid cables on wood panels, the curves of cheeks, smiles and eyes peering forth from the varying depths of exposed cables underneath.

A laborious process of "grinding" down the protective rubber of the cables enables the layers of color to show: from the blue of the industrial paint to the white of the rubber underneath and the glint of silver metal.

While Park's work once focused on the inundation of images in today's modern society, depicting Osama bin Laden and Albert Einstein, his latest works incorporate the duplicitous nature of media and perceived reality, using friends.

"He purposely picked people that look a bit rough, who could be perceived incorrectly", said Lee Hye-min, a PR spokesperson for the gallery. "But in reality all these people are gentle and pure-hearted".

That disconnect between truth and presentation served as the inspiration for the 30-year-old's second solo exhibition, titled as an abbreviation of "media" and "idea".

"More than propose a solution (to media), I wanted to show that there is a problem in creating an awareness" Park said in a phone interview. "Sort of like, 'What would it be like to rethink things?'"

In order to immerse himself into the concept, Park cut himself off from all forms of communication.

"For about three months, I got rid of my phone, TV, Twitter, everything", Park said. "I felt I had to try it at least once, for my work".
As the current-events savvy Park typically takes in a variety of information via news, TV and the Internet, the cold-turkey isolation proved a struggle.

"At first it was hard, uncomfortable, then after a while it was fine", Park said. "You feel like you need media in your life, but you realize it's not necessary".

On an added level of discourse, it is, of course, the cables themselves that both comprise the work and typically deliver the media images to the eye. Park purports to portray a message of critical analysis, but also manipulates the material to create new form and new shape.

Not that it's a simple process. Accruing the wires for his work since he began more than three years ago has proven difficult, as individuals rarely place orders for the industrial material. Park manages to get away with it by sometimes tacking on his order with other companies' bulk purchases. 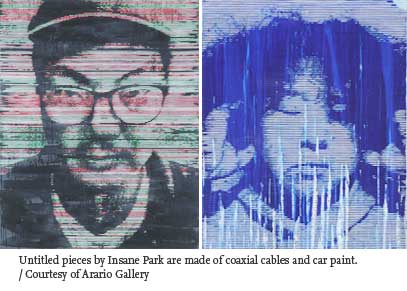 Another factor is the introduction of color into his new works. Black cables used to be the easiest to purchase, but here the artist branches into yellow, red and green cables adding a touch of telegraphic nostalgia.

Though the materials are the most prominent characteristics of Park's work, it is a wry linguistic wit that sticks. Neon light works spot the exhibition, and the phonetically-spelled word for "media" in Korean instantly switches to the Korean word for "trust" with a darkened bulb.

Even Park's artist name (he was born Park Young-duck), carries a colloquial humor a la "Doctor Who". When people search for the artist, they ask: "Are you Insane?"

And, indeed, Park himself can be found within his creations - the molded statue of a haloed man surrounded by antique televisions isn't another nameless figure among the portraits. It's Insane himself, projected through the medium of physical structure and sound. The soft buzzing of the TVs' static channels before him mimics the noise of Park's grinder in his studio, as he cuts into the cables for his work.