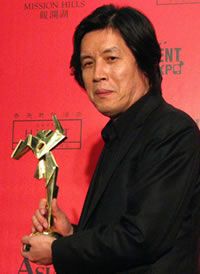 At the Asian Film Awards, which was held as a part of the opening ceremony for the Hong Kong International Film Festival, 'Secret Sunshine' competed with Ang Lee's 'Lust, Caution' and Peter Chan's 'The Warlords' and won the coveted award.

Jeon Do-yeon, who received an award for Best Leading Actress, thanked director Lee Chang-dong and co-star Song Kang-ho and said she felt honored to be presented with the award when there were so many talented candidates.

The Asian Film Awards was founded last year in order to build Hong Kong into the hub of Asia's movie industry. Renowned Asian movie personalities have participated in the event, making the awards ceremony one of the major film festivals in the Asian region along with the Pusan International Film Festival.