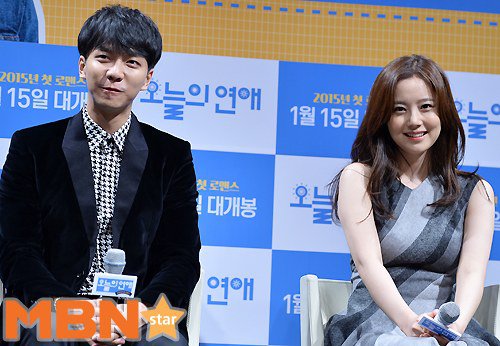 The great chemistry between Lee Seung-gi and Moon Chae-won of the movie, "Today's Love" is garnering people's attention.

On December 16th, Lee Seung-gi attended the press conference for the movie, "Today's Love", which took place in Apgujeong CGV, in Gangnam, Seoul and was asked what he thought about Moon Chae-won's appealing point was. He responded, "She has unexpected hidden qualities. She was serious and sincere in her previous movies. But she is also charming, bright and cute. You will be able to see a lot of her other appealing attributes she was hiding in this movie".

Moon Chae-won in return said, "Lee Seung-gi has a good sense of humor. It is not too much and but natural. He's born with it. He talks well and tastefully. He is attractive as an actor as well as a person".