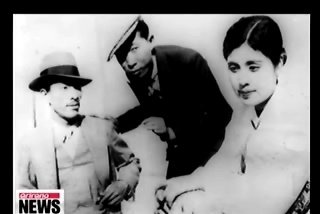 It's Wednesday and it's celebrity news time with our Michelle Kim. She has the latest stories from Hollywood and beyond, so let's get right to business.

[Reporter : ] Well, before we go on to talking about the latest Hollywood gossip, I'd like to tell you about a special event in London tomorrow. Korea's oldest surviving film, "Crossroads of Youth", will be showing for one day only. It is a rare opportunity that film fans will not want to miss.

Lucky cinema fans in London will have a rare chance to see Korea's oldest surviving film, "Crossroads of Youth", on Thursday.

The film tells the story of Yong-bok, who marries a woman named Bong-sun and works hard for seven years to provide for his family, only to see her leave him for another man.

Reeling from the shock of her departure, he leaves his rural hometown and moves to Seoul in search of more opportunities. There, he meets another woman, Kye-soon, who has a difficult life supporting her ill father and younger sister. As things start to look better for Yong-bok, his mother passes away and his sister arrives in Seoul to find him.

But things go horribly wrong for her when she is assaulted by a man named Kye-chul, who also assaults Yong-bok's new love Kye-soon, prompting Yong-bok to seek revenge. This film on love and revenge from 1934 shows the prevailing social norms for issues such as family loyalty, marriage and gender roles, and gives viewers a glimpse of the country's shift from a rural society into an urban one.

It sounds like a good opportunity to see Korea as it was.. and the issues it deals with will certainly be of interest to viewers of today. But if this was made in the 30s, it's probably a silent film, right

[Reporter : ] Yes it is. Under the direction of Kim Tae-yong, who also directed films like "Memento Mori" and "The Birth of a Family", The film is narrated by an actor to help people understand the plot and characters and accompanied by live music to underscore the characters' emotions and build tension. In London, actor Jo Hee-bong will act as the narrator.

This film is rarely screened so for those of you in London right now, I strongly suggest you see it if you can. It sounds like a great way to learn more about Korean history and the social issues that were predominant back then. And to wrap things up now, you have the events bulletin for us, right[Reporter : ] Yes. I'll tell you about a musical that mixes traditional Korean sounds with contemporary music, I have details on the 2012 World Electronica Carnival that will be held next week, and another musical remake of the drama "You're Handsome" that will be showing next week at the Sejong Center for the Performing Arts. Here are the details.

"Fantastick" is a musical that mixes fun and upbeat contemporary music with the sounds of traditional Korean instruments. The show is in an open run at the 63 Art Hall in central Seoul.

The 2012 World Electronica Carnival features an all-star list of world reknowned DJs including Benny Benassi, Daishi Dance, Far East Movement and Shinichi Osawa. The festival will be held from August 10th to 12th on Jara Island in Gyeonggi Province.

The drama "You're Handsome" was a hit with Korean and Japanese viewers in 2009. It is now being made into a musical, and will be showing at the Sejong Center for the Performing Arts from August 7th to September 9th. It features the talents of a fictional K-pop band called A.N.JELL.