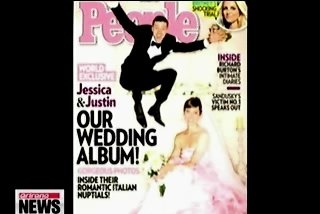 It's Wednesday and it's celebrity news time with our Michelle Kim. Today she has the latest celebrity gossip and a merger between two very big film productions that made headlines this week.

So what do you have for us today[Reporter : ] To start us off, I have news on the American Music Awards, an engagement for one rock star and legal trouble for another, and a wedding video gone bad. Take a look.

Three musicians were added to the line-up for the American Music Awards. Carrie Underwood, Pink and Pitbull will be performing alongside previously announced performers Christina Aguilera, Taylor Swift, Nicki Minaj and Linkin Park. The awards show will air on November 18th.
A member of the Rolling Stones is engaged, according to a British tabloid. The Sun reported Tuesday that 65-year-old guitarist and bassist Ron Wood popped the question to his girlfriend of six months, 34-year-old theater producer Sally Humphreys. This will be Wood's third marriage and comes just four years after his divorce with British model Jo Wood.
Rock star Russell Brand has made headlines once again. He's been sued by a pedestrian named Victor Sneed, who claims the actor hit him with his car in Los Angeles earlier this year. Sneed claims Brand was driving "negligently", causing him personal injury, property damage and lost wages, while racking up huge hospital bills. Sneed is suing the rock star for more than 25,000 U.S. dollars.
Almost two weeks after his wedding in Italy, Justin Timberlake is making headlines again. A wedding video made by one of the star's close friends has caused a stir online. The 8-minute video begins with a message saying "Greetings from your Hollywood friends who just couldn't make it" and features interviews with homeless people who wish the newlyweds well. The video was not meant to be shown to the public, but since it was leaked, nearly 80,000 people have accessed it on YouTube, with some leaving crude remarks. Timberlake has since issued a formal apology.

Thanks for those updates. Let's talk about the Justin Timberlake wedding video. Could you tell us more about it and why it caused such a huge stir on the internet[Reporter : ] Well, the video was made by a friend of Timberlake's and was created as a joke gift for him and his bride. It was not meant to be shown to anyone but them, but that plan backfired when a gossip website somehow got a hold of it. Then, a tabloid tracked down one of the homeless men who appears in the clip and found out that he had received 40 dollars for his appearance.

Well, I hope he wasn't involved and I hope that the two newlyweds will stay out of trouble. And now moving on, what else do you have for us[Reporter : ] Well, it looks like the "Revenge of the Sith" film will not be the last Star Wars installment after a recent deal that's shaken the film industry.

Geoge Lucas has agreed to sell Lucasfilm and the "Star Wars" franchise for 4.05 billion U.S. dollars in cash and stock to The Walt Disney Company, along with the promise of a new film in the series in 2015.
Since the completion of the last "Star Wars" episode, "Revenge of the Sith", in 2005, Lucas has denied any plans for more "Star Wars" films.
But with the merger, the plan will be to release a new movie in the series every two to three years.
Although Walt Disney has taken over Lucasfilm, George Lucas will still exercise control over the "Star Wars" series as the creative consultant on the new films.

[Interview : George Lucas, Director] "It was a perfect match of two companies that are constructed similarly, do the same kind of product, and I think it'll give me a chance to go off and explore my own interests and at the same time, feel completely confident that Disney will take good care of the franchise I've built".

With the merger, Lucas will become the second-largest individual holder of Disney stock, with a 2.2 percent stake in the company.
The deal is Disney's third bid in less than seven years to take over a studio or character portfolio.
In 2006, Disney signed a deal with Pixar to acquire "Toy Story" and in 2009 bought comic book powerhouse Marvel Entertainment.

This must be a shock to "Star Wars" fans, mostly because even I can't imagine Walt Disney taking over the series.

[Reporter : ] You know, it was shocking to me, too, at first, but on the positive side, the deal will produce another episode of the series in 2015 and we will continue to see more "Star Wars" films every two to three years.

Well, hopefully the series won't be much different from before. And now, to wrap things up, you have the events bulletin for us[Reporter : ] That's right. Brian McKnight will melt our hearts on the last day of November. Soon after that, Epitone Project will have a three-day run in early December and some of the best hip-hop artists in Korea will join forces for a concert on the 28th of that month. Here are the details.

R&B musician Brian McKnight has melted the hearts of fans around the world with hit songs like "Back at One", "One Last Cry", "Anytime" and more. He will be bringing his soulful music style to Korea on November 30th at Ax-Korea in southern Seoul.

Epitone Project will offer beautiful piano melodies and his warm vocal tones at a concert at the Blue Square Samsung Card Hall from December 7th to the 9th. He will be accompanied by a 17-member orchestra.

After a successful show last September, the hip-hop concert "On The Mic" will have its second installment at Coex's Hall C on the 28th of December. The line-up features artists from Hi-Lite Records, Illionaire Records, and O-T, including Palo Alto, Dok2, Beenzino, Double K, Juvie Train and more.