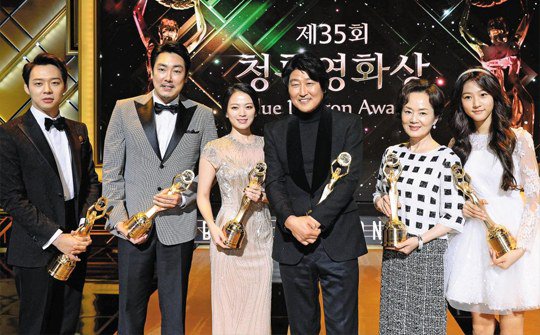 The final decision by the Blue Dragon Awards was "The Attorney".

The film, "The Attorney", based on the real life story of the late former president, Roh Moo-hyun, received Best Picture award at the 35th Blue Dragon Awards ceremony at Seoul Sejong Cultural Center on December 17th.

"The Attorney" is a story about the five trials that had completely changed the tax lawyer, Song Woo-seok (Song Kang-ho)'s life, who had only a high school diploma and was somewhat of an outcast in the legal society, and the people around him in the early 1980's Busan. 11,370,000 people came to theater to watch the movie.

Choi Jae-won, CEO of Withus film, who came up on the stage to receive the award said, "Over 10 million people proved how a film should communicate with its viewers through this movie. Although one film cannot change the whole world, I learned a lot about how we should lead our lives and how to respond to people's hearts".

Meanwhile, "The Admiral: Roaring Currents", which had received main awards from Daejong Awards including Best Picture, Best Lead Actor, and Planning Award, had to be satisfied by receiving only Director Award and Most Viewers Award at the Blue Dragon Awards ceremony this time. The reversed, contrary result of these two movies drew public interest.

This year's Blue Dragon Awards ceremony co-hosted by actress, Kim Hye-soo and Yu Jun-sang showed its efforts to approach films in various viewpoints by presenting some of the main awards to comparatively small-scaled movies such as 'Han Gong-ju' and "A Girl at My Door".

Best New Actress
Kim Sae-ron ("A Girl at My Door")