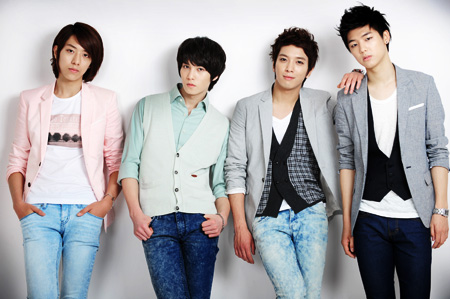 Korean rock band CNBLUE has topped the music chart in Taiwan again with their second album.

The four-member band ranked No. 1 with the newly released album "Thank You" on the Taiwan G-music's international chart for the first week of June.

It came as an added bonus since the band's initial album "First Step" has been hovering around the upper spots in the chart from mid-April. The band's first album topped the chart in the third and fourth week of April, and is currently fifth.

According to the band's agency, CNBLUE topped five Taiwan charts including G-music with its new album, released in Japan on May 27.

The album has sold over 7,000 copies just in the Taiwanese market.

"Previously, when I first heard that we came in first with the 'First Step' album we were really happy. But ranking No. 1 again with "Thank You", we feel as if we are dreaming", said the band regarding the news.

"We really want to go to Taiwan and put on a show as soon as possible", added the members.

Besides the outstanding performances on the music scene, CNBLUE's guitarist and lead singer Jung Yong-hwa and drummer Kang Min-hyuk are shooting the upcoming MBC drama "Heartstrings" which is to start airing on June 29.