Go Joon-hee Learns How to Enjoy Working as an Actress 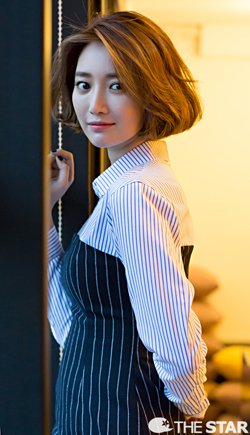 Actress Go Joon-hee seems to have learned how to enjoy what she is doing, and her latest film is proof of that.

"Red Carpet", which was released on Oct. 23, is a romantic comedy involving a veteran adult movie director and a top actress. It drew inspiration from the real story of the film's director himself, Park Beom-soo-I, who directed about 270 adult movies.

"People who meet me for the first time say I'm different from what they thought", Ko said. ""Red Carpet" is just like that. Before watching it, people think that an adult movie director enticed me into appearing in an adult movie, but the film is touching and funny. People may not expect too much, but they will find it defies their expectations".

Ko said she had never dreamed of being an actress until she was spotted by chance and made her debut, so she wasn't so desperate at that time.

"I felt bitter about responses I got back then … because people made a judgment only based on completed works", she said. "They have little knowledge about the process of making a film, and don't know how little sleep actors get and how hard they work. So it was hard for me to accept and understand their responses at first. But thinking back, I was just immature. I had a hard time because I wasn't a real actress but I mistakenly thought I was".

"I thought I chose not to work, but in fact I wasn't offered work", Ko said. "I was just being forgotten. Now, I've changed my mind about what an actress should be like. There wasn't a specific moment or incident, but at some point I tried to enjoy working, be more mature and work harder".

Her changes have led to changes in the way the public views her, increasing interest not only in her acting but also her fashion and lifestyle. Now she is considered a fashion trendsetter, and she happily accepts that. She now believes what matters is being able to enjoy whatever she does.