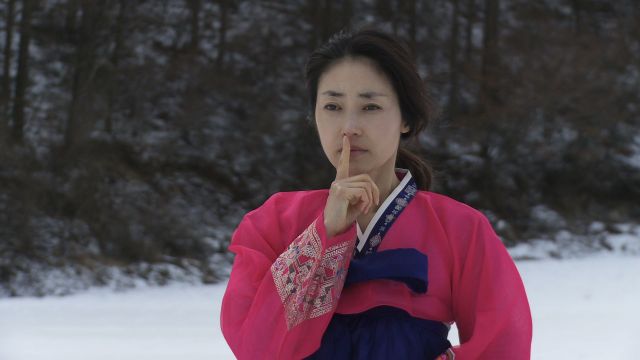 As the excitement of a new film festival wears off and bears into more of a grind, my feelings about the films turn into more of a rollercoaster. I wouldn't really call this my best day at JIFF so far, but it has certainly aroused the strongest emotions.

I started out with "Lebanon Emotion". Inspired, in theme only, by a verse of Korean poetry, it tells the story of depressed people trying to cope with grief. Tempting as it is to describe this film as being about love, the emotions on display here are very disconcerting in their key motivation, and the story somehow manages to be both cynical and hopeful at the same time. The cinematography is excellent- though maybe I'm just a sucker for snow-filled landscapes. While very good, I wouldn't quite go so far as to describe "Lebanon Emotion" as being great. I will note that a conversation I had afterwards, with a Spanish reviewer of Korean films and Woody Kim of the Korean Film Council, further impressed upon me the general themes. 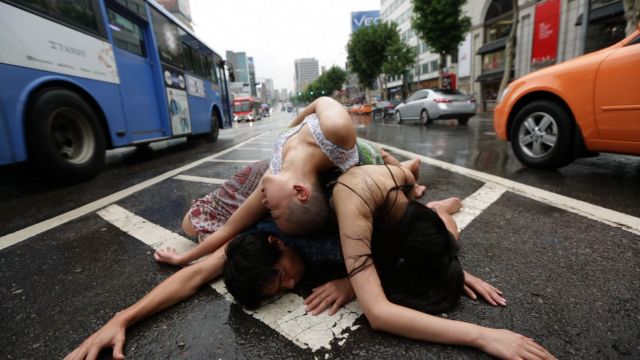 My ambivalence and uncertainty were thus troubling, and went into sheer chaos throughout my next film, "Dancing Woman". I spoke with jury member Carlos Chatrian afterwards, and he quickly admitted to me he had no idea how he was going to interpret this radically inventive experimental film alongside the relatively straightforward narratives of every other Korean film in competition. It's an unusually intense omnibus film- rather than this simply being several films strung together by the common motif of dance, the notion of dance as human connection and expression is explored in levels of increased simplicity. While the first film is nigh incomprehensible to the uninitiated with dance, with each following step the notion becomes more and more relatable, and its power as a force of centrality becomes impossible to understate. Dance montages in mainstream film are now forever ruined for me, as "Dancing Woman" has now exposed the artform to me in an infinitesimally more profound way.

Afterwards I started on short films. I was nearly a wreck trying to absorb all this information. This quickly faded into rage, as the first two films I saw made me nigh-irrationally angry in just how dumb they were. I've often wondered, having seen so much experimental film, whether I have too much tolerance for extended still shots. I now know that I have hit the breaking point on my patience for those. Also- I do not like drunk idiots and do not enjoy watching them act dumb on-screen any more than I do in real-life. From here, though, the short films took a quick turn, with one dealing with the sociopathic elements of peer pressure followed by a brilliant piece on teenagers stuck in an apparently unsolvable crisis.

After a break, I came back for another round of short films. which ran the gamut of experimental politics, the apparent helpless of being labelled a monster, homeless kids with what passes for a family, and an adorable story about a boy being teased for his family's obsession with eating raw food. In total, I saw fourteen films today of wildly differing thematic ideals and general quality- it's little wonder I feel so overburdened having to take in so many ideas at once and I can only hope that tomorrow's relatively light workload will give me more space to think.

One fact I can say for sure about these short films is that they should have a larger audience than just the Jeonju International Film Festival- the themes are surprisingly universal and translate very well cross-culturally. I'll be sure to any information I'm able to find about finding them online here when I get the chance.