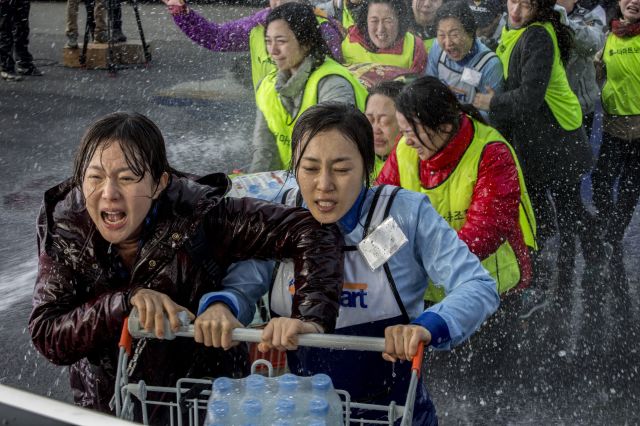 The cashiers and cleaning ladies in "Cart" are constantly told to have faith in the system. That's what the morning loyalty oaths are for. As presented in context, this entire scene looks so utterly ridiculous I would probably have doubted these things even exist except that I already have familiarity with the concept. I guess modern capitalism is an actual religion these days. Makes sense really. If corporations are people with religious beliefs what other God could they possibly have?

If that paragraph was too political for your tastes than just forget about this movie right now. While it has the trappings of narrative "Cart" is an unapologetically ideological message about how the low-ranked employees are the ones that get destroyed when some jerk accountant comes up with an idea to reduce overhead, and it's only by fighting tooth and nail that large corporations can be forced to live up to their promises after making often degrading demands on their workers.

A complaint could perhaps be made that the movie isn't being fair-handed, but in all honesty it's not like corporations actually use their free speech rights to talk to anybody that's not a rich politician. This is a central recurring conceit- the management frequently refuses to speak to employees unless it's from a position of power. Their arguments, dubious enough at the loyalty oath stage, come off as the hollow bullying threats they are in the context of actual people facing actual severe financial problems as a result of these broken promises. Corporations, and their most supportive employees, don't need to worry about hunger.

All right, enough with the misdirection. How is "Cart" as an actual film? Well to be honest it's...mixed. The plot trajectory is haphazard. There's a clear provocation to set the crisis off and pretty much the only option the characters ever have is to just keep doing what they've been doing and hope their company hemorrhages enough profit that they finally admit simply agreeing to the original contracts would cost less than what they're losing in bad publicity.

With the plan this simplistic, that leaves it to the ensemble cast to carry the day. And while the performances here are good, there's fairly little in terms of actual character growth. Everyone learns that they have to fight, if not for themselves, than for the sake of their friends. "Cart" is all about the forceful acknowledgment of the fact that some day, any one of us might be in this position, and that what should mandate our reactions is not a weirdly subservience to relations between slave and master, but a greater recognition of each others' humanity.

For these reasons I'm willing to forgive a lot of the cinematic faults in "Cart", because by design director Boo Ji-young isn't telling a tale of that kind of scope. These are normal, everyday people thrust into the position of collective action in order to maintain a rather meager standard of living, and we as viewers may well face their same situation one day. The question then is, who do we side with- the friends who helped us out when we needed it, or the corporation that only does us favors when it wants something?