[HanCinema's Drama Review] "Because It's the First Time" Episode 8 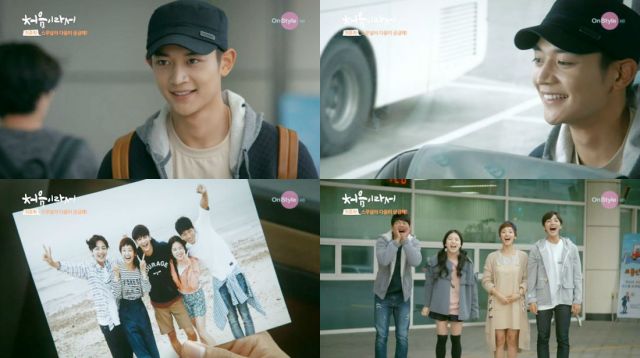 For the final episode of "Because It's the First Time", Tae-oh ruins everything. Well, he doesn't really. Part of the point of being twenty is that you can make big mistakes and it doesn't really make that much of a long-term difference, because there's always tomorrow. As the soundtrack  constantly sunnily reminds us, every day is a new day. And besides, Tae-oh will always have his friends even if he almost managed to alienate half of them.

Tae-oh is unable to resolve the sexual tension with Song-yi, so Song-yi does it for him by making a statement so absolute, and so definitely angry, that Tae-oh can't disregard it this time. In fact, the whole speech she gives in Gunsan is poignant because it points out the big problem with Tae-oh's protective attitude. Song-yi is twenty too. She's also learning about life for the first time, and Song-yi needs to be able to approach these major life crises on her own. This is Song-yi's mother, after all, and Tae-oh has no right to try and stand in the way of that.

Ji-an also gets a good word in on Song-yi pointing out that as his boyfriend, she needs to give him more credit. The fact that Tae-oh was even in a position to go after Song-yi when Ji-an wasn't is an issue. Ji-an doesn't want to lose Tae-oh as a friend any more than Song-yi does, but proper boundaries are needed. As relationship chats go this isn't a particular deep one. Still, it's pretty good for twenty-year-olds.

Se-hyeon, though- she continues to show maturity far beyond her years. All the cast members in "Because It's the First Time" are good, but Jung Yoo-jin especially shines as the young woman who struggles to be as cool and sophisticated as her physical appearance implies. Her own speech about the importance of first time also manages to be touching, in part because Se-hyeon isn't shying away from the reality of Tae-oh's emotional issues while still admitting she enjoyed having, well, a series of first times.

It's fitting that "Because It's the First Time" was, itself, a first time for the OnStyle network. And like the misadventures of Tae-oh and his friend, its imperfections are easily forgivable as growing pains for the network to find its own groove for future dramas. "Because It's the First Time" is a high quality production that exceedingly well captures the ups and downs of being twenty. At only eight full length episodes, it's well worth a watch for anyone.

"[HanCinema's Drama Review] "Because It's the First Time" Episode 8"
by HanCinema is licensed under a Creative Commons Attribution-Share Alike 3.0 Unported License.