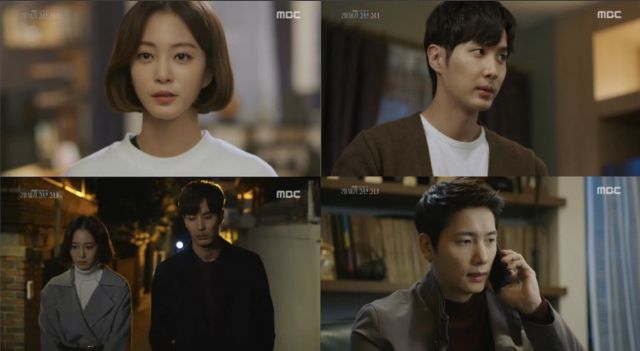 Jin-jin's professional work hazards are consistently one of the more unimpressive means of generating conflict on "Boy and Girl From the 20th Century", which is saying a lot considering how challenged this drama is when it comes to developing conflict at all. I'm still wondering how exactly a can of soda can be poisoned in the first place. Does the anti-fan manufacture her own soft drinks? Or was there arsenic on the lid?

In any case, technical contrivances notwithstanding, it's the result that matters more. Unfortunately that result is to have So-ni and Ji-won pine over Jin-jin without ever explicitly stating how they feel, so the whole thing is just frustrating. I do wonder how it is that the paparazzi aren't all over this. Were they actually following Jin-jin to the obstetrician's office or is there just a guy parked out there all night just in case a celebrity shows up?

Back to the present episodes, the eighteenth one starts with an obnoxious obviously fake photo shoot. I know that's an odd position for me to take, as a critic of television drama for a website that regularly posts these kinds of fashion spreads, but then that's the issue. We know all that stuff is fake, and we look at it because it's aesthetically pleasing. Using one fake thing to enhance another fake thing, though, it's just too much. It calls attention to the lack of internal consistency.

Consider one late scene where So-ni loses his cool at a sexist management type. This is actually exactly the kind of crude language you'd expect to hear from suits in the real-life media industry. But it doesn't work at all in the very family friendly context of "Boy and Girl From the 20th Century", where the only problems celebrities have to deal with are paparazzi and psycho anti-fans. Up until that point the closest we'd seen to a dark side in media professionals was the somewhat pushy woman manager.

In general it's weird how "Boy and Girl From the 20th Century" tries so hard to be modern it ends up coming off as Puritan instead. It's hard to make much else sense of how both Ah-reum and Yeong-sim have romantic subplots, and that's all they have, except they don't. Somehow director Lee Dong-yoon show these people doing obviously cute romantic stuff like cleaning the kitchen together or having lunch while stripping them of any romantic context.

"[HanCinema's Drama Review] "Boy and Girl From the 20th Century" Episodes 17-18"
by HanCinema is licensed under a Creative Commons Attribution-Share Alike 3.0 Unported License.