[HanCinema's Drama Review] "Drama Special - What is the Ghost Doing?" 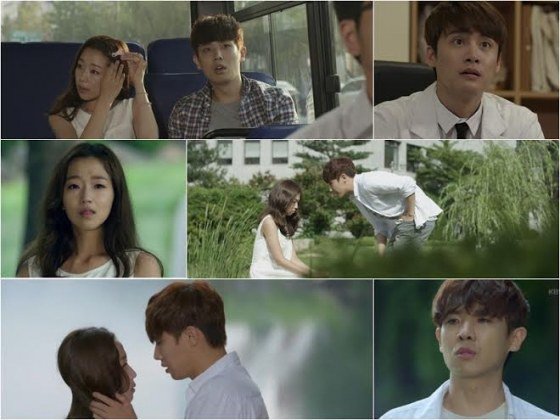 Cheon-dong (played by Lee Joon) is a man who alternates between thinking the best and thinking the worst of his girlfriend. Moo-rim (played by Jo Soo-hyang) makes a point of constantly agitating Cheon-dong out of a mix of spite and genuine romantic affection. These two are the perfect portrait of a couple that makes you wonder why they're even together in the first place, since they seem to be more about slapping than kissing. And it's from that backdrop that Moo-rim visits Cheon-dong from the great beyond for a final request.

For a project like this, it's essential that the leads have great chemistry. Cheon-dong and Moo-rim walk a very thin line between funny and obnoxious. Luckily enough, Lee Joon and Jo Soo-hyang are up to the task. Both of them manage to communicate essentially and effectively that their characters aren't mean. They're just flustered. Cheon-dong has had it with Moo-rim's unpredictable behavior, and Moo-rim is impatient because, well, she's a ghost.

Obviously that's not the complete story, since Moo-rim was erratic even before she died. That's the point at which "Drama Special - What is the Ghost Doing?" transitions from paranormal comedy to serious heartfelt emotions. Told from Cheon-dong's perspective, it's easy to think the worst of Moo-rim. This is one of the most painful parts of romance in general, is never knowing whether the other person is actually being honest or just jerking you around for reasons unknown.

The storytelling device of Moo-rim being a ghost, while initially cutesy, ultimately ends up being an exploration of love along these lines. While dying meant that Moo-rim was completely incapable of fulfilling her own last request, we find out that even beforehand her options were somewhat limited. Partially, though not completely, this was Cheon-dong's fault for jumping to conclusions. Even if Cheon-dong and Moo-rim were doomed from the start, well...what really matters in the end? Being right, or being a good person?

It's very touching material. When the epilogue opens up with activities that technically have nothing to do with the plot to date, Cheon-dong's mental record of what happened is quite emotive, and indicating a world view that has very much been expanded by the ghosts of his past, because Cheon-dong now better understands the ghost of the present. And then we get to the final scene and it's just...look, we always knew that Moo-rim was an impulsive jerk. It's not like the theories about her character were mutually exclusive.

"Drama Special - What is the Ghost Doing?" is directed by Cha Yeong-hoon, written by Son Se-rin and features Lee Joon and Jo Soo-hyang.

"[HanCinema's Drama Review] "Drama Special - What is the Ghost Doing?""
by HanCinema is licensed under a Creative Commons Attribution-Share Alike 3.0 Unported License.