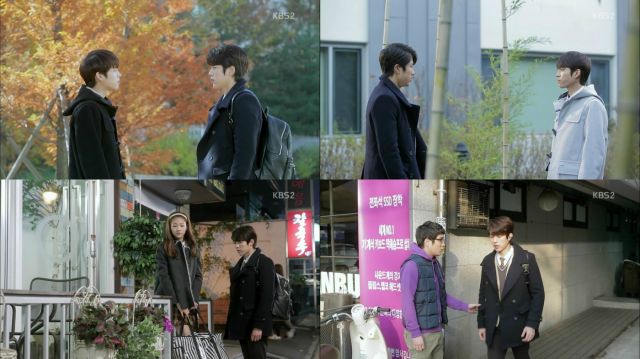 As it turns out neither Seul-bi nor Woo-hyeon is particularly ill, although it is established and exposed to most of the rest of the cast that they are in some sort of strange, literally symbiotic relationship. It bears repeating- of all the possible ways "High School - Love On" could have utilized the fantastic design of the premise, this really does rank among the least interesting. The worst part about the mysterious wrist is that it reduces Seul-bi to an almost completely passive character. There just isn't all that much for her to do when she devotes so much energy to hiding her wrist.

So it's up to the other characters to do something. Specifically, provide moral support. Their show of solidarity would have had a lot more emotional impact if this was built up to somehow. Like, if "High School - Love On" had been a drama about Seul-bi using her angelic insights to solve the problems of her fellow students. Or if some crisis had gotten the students to second-guess their attitudes about how they treat other people. Or if the other students underwent significant characterarcs, at all.

But that isn't the drama we've been watching. "High School - Love On" had been, up until relatively recently, a rather cynical drama that dealt with the topic of bullying very seriously. How did we get from everyone being petty and spiteful for no good reason to being well-intentioned? Again, it might have possible for the build-up to have been convincing, except that the drama's been spending an inordinate amount of energy on the magic wrist symbol.

How many cliffhangers have we had by now that just involved Seul-bi's wrist symbol apparently being found out? I've lost track. Meanwhile, other stuff has been happening in the margins. Woo-hyeon appears to have forgiven his mother, for some reason. Maybe it's because of the flashback from earlier in the episode? A frustrating flashback, at that. I would like to know more about Ji-hye's past, specifically why she abandoned her son. But no, all the flashback does is establish that Ji-hye has always worried and cared about Woo-hyeon. We could have guessed that, you know.

About the only positive point I can make about the drama right now is that the character actions aren't stupid. Their motivation is undeveloped to be sure, but they're not acting like idiots. It's the script that's really lost track lately. It would seem that the reunion between Seul-bi and Woo-hyeon that'd been factored in from the first episode is supposed to have emotional impact because we, the viewer just want them together romantically. I guess that's a passable resolution but I was really expecting something a lot more interesting.