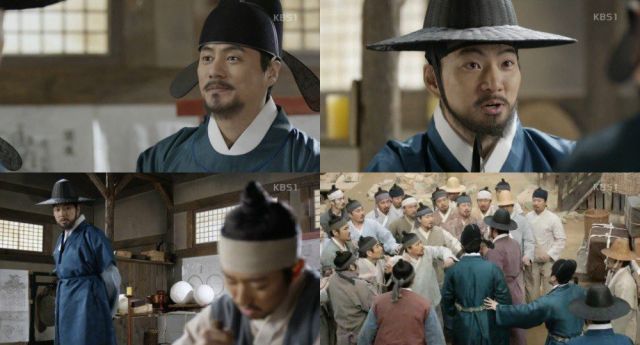 Once again, Yeong-sil lounges around just in the peripheral issue of major political questions, this time out on the frontier. Nothing immediately important happens. There ends up being a timeskip following a somewhat anticlimactic death scare for King Sejong, leading me to believe that "Jang Yeong-sil - Drama" focuses on certain historical incidents more out of obligation than because of actual relevancy.

Even the science is fairly lacking this episode, because Yeong-sil's water clock is remarkable less for being new and more for having a very elaborate diorama style design. It's always worth mentioning that the set builders for "Jang Yeong-sil - Drama" are pretty exceptionally competent. The clock is the work of a true artisan. Yeong-sil is, regrettably, not actually an artisan, so I find it strange how these kinds of innovations are always ascribed to Yeong-sil personally.

The greater point here, though, is on the visibility of science and why that's important. Most of the clock designs we've seen so far are, in addition to being intricate, fairly obscutory. When the Chinese couldn't figure out how their own legendary water clock worked, part of this was due to the design not being all that intuitive. While a good scientific engineer could break the clock apart, to a normal person the functionality was practically witchcraft, because it wasn't clear what was causing the moving pieces to move in a predictable pattern.

Yeong-sil's new clock does make the water element reasonably obvious, hidden as that aspect is among the clock's more elaborate details. But an even better example is the Korean alphabet, as "Jang Yeong-sil - Drama" finally hits upon a plausible geo-political conflict. China finds the notion of a Korean alphabet to be offensive, because as they see it, the Chinese alphabet is perfection that should be considered inalterable. All of this ties into social control. Just as Korean elites seek to control the education of the lower classes, so to do the Chinese wish to control Korea for the same reasons.

This is all a very good analogy that suddenly makes the motivation of the villains in "Jang Yeong-sil - Drama" make a lot more sense. Although I still don't approve of the drama's tendency to center major scientific breakthroughs around arson and swordfights, the material is interesting thematically and presented in such a way that the political stakes feel quite real. I just wish that we'd gotten to this point a lot sooner- where long-term strategic thinking is the main motivation point rather than generic spite.