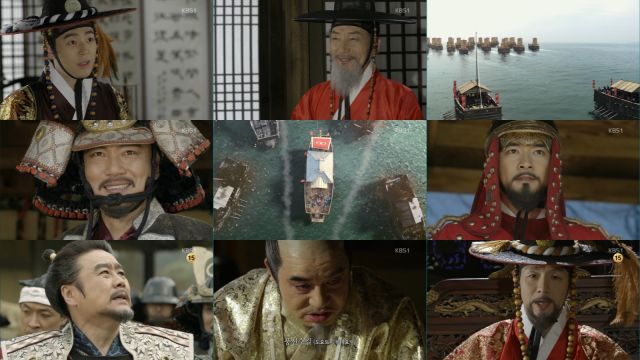 It's a little strange how the big naval battle this episode actually comes off as kind of boring. A movie like "The Admiral: Roaring Currents" can make use of the filmic experience and dramatic license to make any kind of war scene seem really cool. But "Jing Bi-rok", with its usual emphasis on stoic, unchanging permiters, comes off far more like a vortex of strategy. Lee Soon-shin wins more because he has an actual plan than because of any inherent brilliance. If nothing else Kim Suk-hoon definitely has the stoicism down pat.

Everyone else it's just more of the usual. One would think that a resounding naval victory would be cause for optimism in some parts but no. The Korean leadership, nearly all of the splintered parts of it anyway, are just sort of milling around still freaking out. The exact cause and reasons differ this time- like they always do. But to be entirely honest, after a certain point these arguments do get to be tiring. I almost want a military revolt to take-

...Oh, right. I guess in that context there is plenty of reason to be worried. That's the trouble with ambition really, is that even if you manage to get everything you want, from that point it becomes a point of paranoia that someone's going to try to take all of that away from you. It's hard to ignore that, awkward position notwithstanding, Seong-ryeong has mostly maintained his composure and is still reasonably competent. It's the so-called power players who are really ina fix.

It's another historical endpoint that's useful to note. Chaos is bad for everyone. In some extent I can see why democratic forms of government might hold some appeal for megalomaniacs. Because they only hold power for a fixed period of time, nobody bothers trying to overthrow them until the next election. Such rules don't apply for men like Hideyoshi, though, who are so confident in their control that it's easier to just obsess over the finer details.

So another average episode of "Jing Bi-rok". Well, maybe somewhat below average to be honest. After a certain point the sheer scale of repetition does get to be exhausting, and this isn't ameliorated by the occasional visage of ship-to-ship combat. It's actually difficult to criticize "Jing Bi-rok" to a large extent, because it's kind of like critiquing a professor's historical lecture. The purpose isn't to entertain but to educate, and even if the former point is iffy the drama continues to succeed on the latter one.