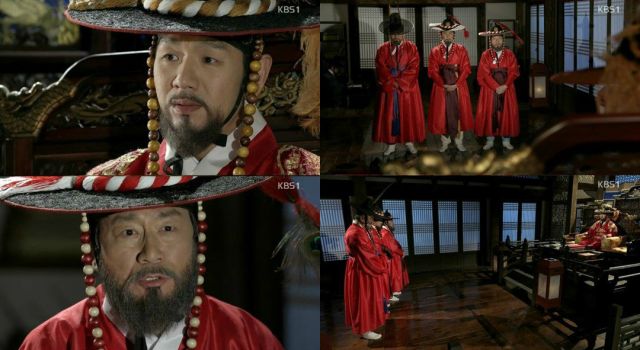 While the external political problems have not by any stretch of the imagination disappeared, "Jing Bi-rok" mostly returns to domestic problems this episode. And fortunately, this is a fairly hopeful stretch. Unlike the beginning portion of the drama, everyone is pretty much in agreement now that war is a serious immediate concern and that resources need to be allocated to allowing the Koreans to deal with a potential invasion on their own. Foreign armies have just caused way too many problems lately.

Religious discussion also plays an important role. Unfortunately, I am not referring to the Buddhist monks who joined forces with the military. Upon further reflection I realized that it wouldn't make much sense for the Buddhist monks to show up anyway- "Jing Bi-rok" is all about political power and calculations. And Buddhists in this time period were noteworthy mainly for avoiding politics, because several Buddhist teachings were in direct conflict with Confucian thought.

I bring up these events that don't actually happen this episode to illustrate an important point- it's kind of unlikely that "Jing Bi-rok" is going to deal with very much of the more exciting swashbuckling aspects of war. Lee Soon-shin's chronic absence from most of the story is at this point practically a running joke. Anyone who came into "Jing Bi-rok" expecting a prequel to "The Admiral: Roaring Currents" will no doubt have been wholly disappointed.

But once again, that's what history is- the actual battles are often over in a matter of minutes. Most of the time is actually spent in negotiation and prep work. At least that's how you're supposed to run a war. Seong-ryong's presence in the drama is mostly all about him frequently trying to remind people, again and again, that careful deliberation and foresight is needed in these matters. The problem is that Seong-ryong isn't a very charming fellow, so usually events have to prove him right repeatedly before anyone pays serious attention.

Even so, the gang's all back together again. The more competent characters have momentarily prevailed, and the political discussions now trend toward ways of solving problems rather than arguing whether or not problems actually exist in the first place. That's at least something. But until the war is finally and firmly ended once and for all resting easy is just likely to lead to overconfidence. Mild historical spoilers- the situation is going to get really bad at least one more time.