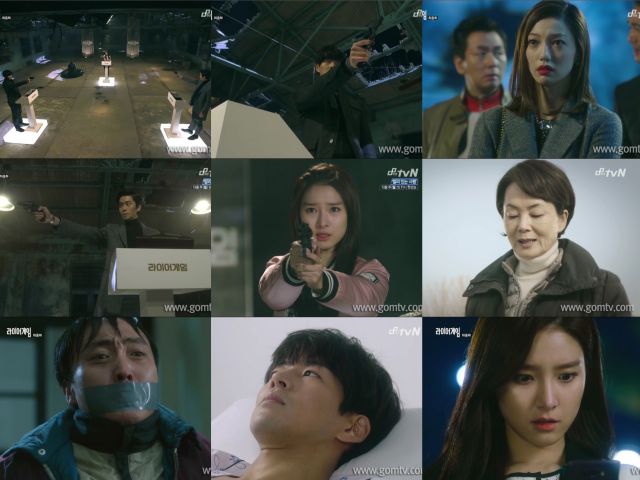 Well, "Liar Game" does at least manage to explain why the story took a sudden turn for bizarre conspiracies- we have to find out next season. Normally that's a pretty lousy cop out, especially since it's not clear whether they'll actually make another season, but it does explain why Woo-jin and Do-yeong's backstory has suddenly become so important. They're only one part of a much larger universe.

Note in particular the flashbacks. Ultimately nothing so terrible happens to really explain why Do-yeong turned evil and crazy- a fact he practically admits to Woo-jin while deliberately courting death. Rather, this simply appears to have been the first stage of Do-yeong's life that led him down this very dark course. Given Woo-jin's backstory to boot, what we're left with is the impression that there's much more going on than can reasonably be unraveled in just a few episodes.

In this sense, the final round of "Liar Game" is less an actual contest than it is just Woo-jin and Do-yeong taking a desperate vicious stand against each other to hash out the anger of their childhood, mostly because they don't really have another outlet for it and once the game is done, well, it's done. The final showdown's rules are incredibly transparent, and it's obvious that Do-yeong isn't even trying to get a tactical advantage with his mind games. His attempts at provocation are deliberate passive-aggressive rage.

This leaves Da-jeong to ultimately choose a side, and it's noteworthy how right until the end she continues to couch matters in terms of trust rather than game theory. For those paying attention to the way the rules are laid out, it doesn't actually make tactical sense for her to attack Woo-jin. Nor, for that matter, does his behavior at the start of the episode make much strategic sense. The question is whether it's reasonable to suspect a person of lying when they're not even making an effort, but Da-jeong refuses to even ask it.

In broader scale I don't know how much of this drama can really be applied on greater metaphorical terms. "Liar Game" is franchise, and for those of you who want to know what happens next, there's plenty of original Japanese source material on the subject. In the context of this one (and possibly only) season, all I can say is it's been a reasonably fun play on the tenets of game theory. While it possibly it could have been done better, the sheer novelty of the concept of "Liar Game" is enough to warrant a watch for those into that kind of thing.