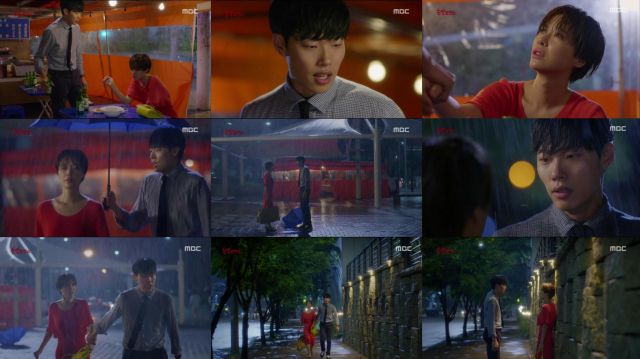 Bonnie continues to sulk about how Soo-ho sabotaged an intimate encounter which at best was going to result in an unauthorized video floating around the Internet and at worst was going to be a gang rape. Bonnie does tend to be frustrating like that- for all her powerful faith in the whims of fortune, Bonnie is rather unappreciative of actual people making a real direct effort to help her and tends to stick to the whole "have sex with a tiger" command very literally.

...Which incidentally, she might have achieved this episode unintentionally. I don't remember the exact wording of the advice but I'm pretty sure it was a euphemism and that sex was never actually mentioned. It seems likely that Bonnie is in the same position, given that she tries to reach her spiritual advisor for a clarification and he's mysteriously out of the office. Mostly though, I just want Bonnie's self-destructive behavior to end. And I'd also like to see Bo-ra do something other than be a vegetable.

"Lucky Romance" takes its sweet time dealing with these story threads as the plot once again moves at a crawl. The main reason for this I can see is that director Kim Kyeong-hee-II really just wants to take her time with setpieces, sticking to the classics. A drunken night in one of those outdoor tents, an emotional confrontation in the rain. The second lead worried to death about what happened to the main character.

A less charitable explanation- writer Choi Yoon-gyo is only particularly confident in his ability to write generic scenes like this, which is why we get so many of them for such an extended period of time. "Lucky Romance" makes a point of being an aggressively safe drama. It takes few risks and offers the minimum level of deviation from the romantic comedy formula. Motivation notwithstanding, it would be pretty easy to pick up what's going on this episode without knowing anything about the previously established plot.

But the lack of creativity means that a lot of the drama is lacking in gravitas. Curious scenes implying mysteries i Soo-ho's family background fail to impress, as does much of what happens at the company. The main exception is when Ryang-ha (played by Jung Sang-hoon) teases Dal-nim over his having acquired a rather important possession of hers. Now that kind of performance is quirky and fun, and more the kind of thing I would like to see from this drama.