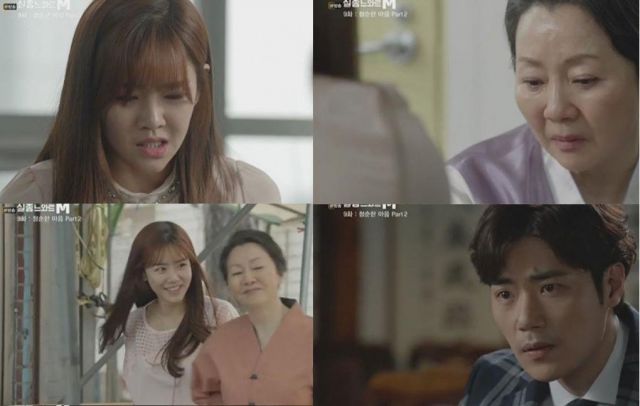 The cast helpfully explains what they've figured out regarding the mystery so far, and Soo-hyeon helpfully puts the clues together in such a way that we've at least got a basic narrative explaining what exactly has happened to date. In short, there was an incredibly elaborate scam perpetrated for the sake of extorting money from the woman who wanted to find her daughter again. This ends up going badly because, like most elaborate scams that involve large numbers of people, this one required that all the participants shut up and act predictably.

After "The Girl Who Sees Smells", I really needed this- a story about how things go chaotically and disastrously because people act like people. A major plot point ends up concerning a detail that had been kept secret regarding the long gone daughter. Why would the old woman keep a secret like this? Why not? Again, people aren't rational. They frequently make random, arbitrary decisions without bothering to consult the rest of the group. Because we are both selfish, and curious.

As it turns out Soo-hyeon's behavior is much more rational than was initially let on. It's not necessarily smart rationality, but I like how the big revelation at the end actually explains Soo-hyeon's behavior to date almost perfectly. The lack of preview means we don't know what kind of case will close "Missing Noir M" out. What is clear is that Soo-hyeon's personal demons aren't related to a specific person so much as his own personal life philosophy.

Even the denouement does a lot to exposit the important parts of Soo-hyeon's character. It's easy for him to act all high and mighty when the criminals don't have any moral ground to stand on. But the lack of excessively depressing dimensions in this case gives Soo-hyeon less of an easy out. It would seem that Dae-yeong might have been on to something after all.

Lots of smaller moments sprinkled throughout the episode do a lot to add to the ambience, providing a fairly broad emotional palate. I thought the scene where Seo-joon reacts to Dae-yeong rejoining the core team was just plain adorable. This is probably my favorite episode of "Missing Noir M" to date- a refreshingly well-constructed mystery, with a story that appropriately veers between the awe of complex masterminding while still making a note of how being in control of everything does not necessarily make for a sympathetic likable character. That's reasonably instrospective stuff for a crime procedural.