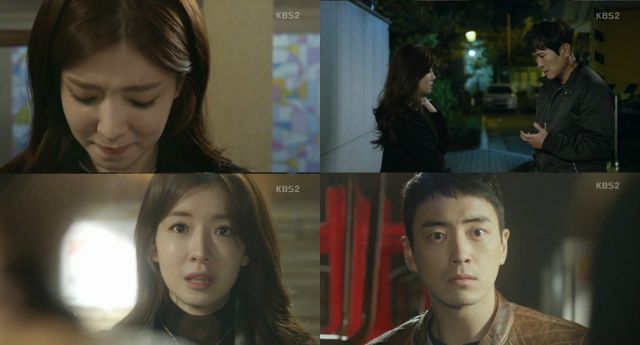 With the true villain unveiled, we know now that "Naked Fireman" is, in the end, a thriller. But, as is usually crucial, the characters themselves are not aware of this. Jin-ah is baffled by the extent to which Cheol-soo does not resemble the terrifying man in her memory, and slowly starts to piece together the inconsistency of memories. Unfortunately the process is slow, and it simply does not occur to Jin-ah that if not the man with the birthmark, the culprit would have to be someone frighteningly close.

Cheol-soo is in an even worse spot, though, as the poor sap continues to think that he must be the protagonist in some sort of goofy romantic comedy, only finally becoming disabused of this notion in the very dramatic climax. I like how, even though we've seen Cheol-soo in all sorts of dangerous situations so far, he's a completely different person in the face of imminent non-heroic death. Slow though he may have been to catch on, Cheol-soo quickly wises up to the true danger of the situation.

The pacing remains brisk because while we know who the bad guy is, as of yet this person's plan is rather unclear. Even the past motivation is hazy, although really, that's just all the more reason to tune in for the final episode to see how everything is going to resolve. The situation come cliffhanger time looks to be completely hopeless. Cheol-soo simply isn't smart enough a protagonist to get out of this. That's why he needs so much help.

And that's a very tall order considering how many characters are running around with their own radically differing motivations. The phone call near the end is actually a fairly significant relief, showing how whatever the genre fiction, love is unconditional. This brings a sharp retroactive sting to Cheol-soo's comment about Jin-ah lacking friends. Even though Cheol-soo is the main guy in physical danger, Jin-ah inspires a lot more worry because she can be in danger without even noticing.

The narrative in "Naked Fireman" is very punchy, quickly hitting all the right character beats without so much as a mild misstep. The tension is fantastic, well balanced tonally with the moments of comic relief. The situation is at too high a crisis point for the production team to waste much time. I eagerly await the final episode, where I expect all the loose ends to be tied up in a very satisfactory manner.