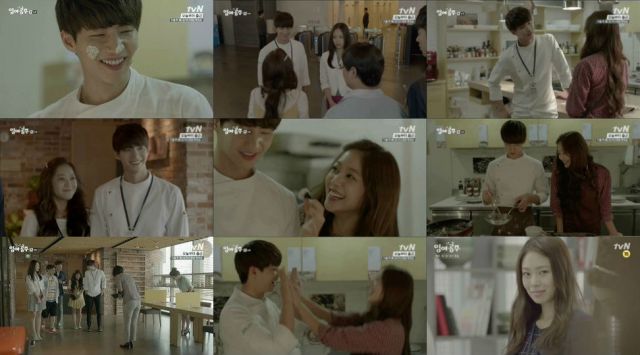 The drama runs into some tonal problems here, as the comedy doesn't really work that well with the story as presented. For the most part "The Idle Mermaid" has been sympathetic to the plight of the unemployed, then we get an opening joke that seems to be poking fun at how lazy jobless bachelors are. This goes down especially bad because even in the same episode those very same issues of self-worth come up again as more progress is made on the permanent employment front.

The writing here is really all over the place and doesn't actually seem to be leading anywhere specific, which makes the humor difficult to properly gauge. In a drama like "Golden Tower", where the episodes are largely self-contained, there's no big problem with this kind of scatalogical comedy because even if we don't know exactly where it's going, the drama's not going to drop a huge bomb of depression on its characters out of nowhere.

By contrast, that's exactly what happens here with plotlines involving loved ones and betrayal from what were initially just light-hearted adventures. Maybe the message here is that life can be fun and sweet only to all come crashing down in a single unexpected moment. This probably would have come off a lot better if these plot points hadn't come up so suddenly and arbitrarily. There's not any real build-up here.

In the long term Jin-ah is definitely established as being more catty and evil, but personally all I kept thinking was that her plan really should not have worked. In the first place Si-kyeong had only just called her out about this kind of sneakiness last episode. He should know better even if the guy doesn't want to fire her. But in the second place his defensive reaction at the staged confrontation makes no sense. It is, as a matter of fact, the company's business if he dates a subordinate because that's a sexual harassment lawsuit waiting to happen.

The misunderstandings at play in "The Idle Mermaid" are irritating mainly because they feel like an effort on the part of the writer to bide for time. Even the mid-episode cliffhanger comes off as pretty weak- the question of whether or not Ha-ni's identity as a mermaid is discovered isn't a particularly tense one because we don't really know what the consequences are. By contrast, the end of episode timer is very clearly counting down to Ha-ni's death- an event whose seriousness seems rather undermined by the weakly developed storylines that make the main emotional thrust here.