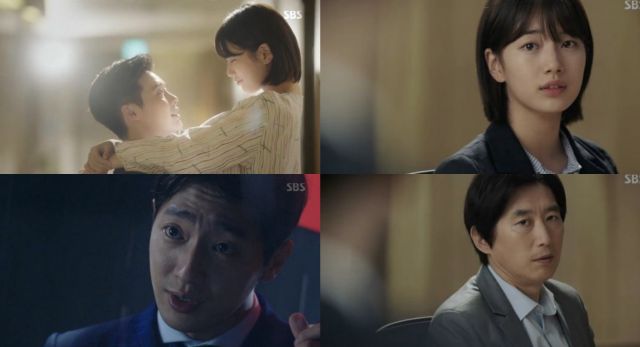 Joo-an (played by Lee Na-ra) is the true culprit behind a serial killing spree that Detective Choi and then-prosecutor Yoo-beom incorrectly pinned on an innocent man a long time ago in the backstory. The story behind these events is so incredibly potentially interesting that it was with a groan that I realized we were instead just going to get more flashbacks explaining what the deal was with that solider who went on a rampage, and how this created an unbreakable romantic bond between Jae-chan and Hong-joo somehow.

No, far from that, Joo-an is dispatched with comical ease almost immediately by Yoo-beom. For a serial killer that has evaded law enforcement for at least a decade Joo-an is not as competent as I would have expected. When Yoo-beom narrates an alternate sequence of events designed to make him look good, I was struck by how, from Joo-an's perspective, that plan makes a lot more sense than the one she actually ended up doing, with far less potential for backfiring.

From a screenwriting perspective I can understand why Yoo-beom has to be the final villain rather than Joo-an. He's the antagonist with far more screentime after all. But his motivation has been so all over the place Lee Sang-yeob has to mug for the camera just to let us know the character is evil, since otherwise it would to be too easy to interpret Yoo-beom's actions sympathetically.

I miss the Yoo-beom from the early episodes. That Yoo-beom was evil, but he was also very good at rationalizing his actions. We could actually see from that Yoo-beom's viewpoint how actually, he was the hero. Then that jerk Jae-chan came along and wrecked Yoo-beom's car and stole his girlfriend. Consider that guy coming up with a plan to kill Joo-an, justifying it to himself by saying that she deserved to die and he just made an honest mistake and doesn't deserve to lose his career over it.

Even better, make Joo-an's ability to be an effective serial killer contingent on how she has access to dream prophecies too, and has been using that ability to blackmail Yoo-beom in addition to comitting serial murders. That would explain, at minimum how she has the usual serial killer omniscience superpower, and immediately establish her as a credible threat to the three main characters. But no, why bother doing anything with the drama's actual premise when we could instead just have episode thirty be a gratutitously long courtroom scene?

"[HanCinema's Drama Review] "While You Were Sleeping - 2017" Episodes 29-30"
by HanCinema is licensed under a Creative Commons Attribution-Share Alike 3.0 Unported License.