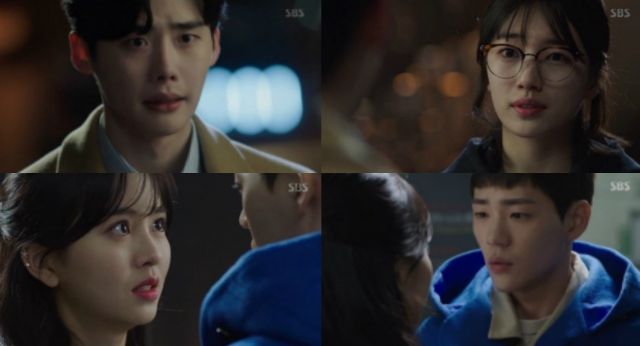 One half of the story for these two episodes of "While You Were Sleeping - 2017" is about how a young Hong-joo first attempted to use her powers of prophecy to do good and predictably failed spectacularly. I state this explicitly because "While You Were Sleeping - 2017" itself is rather unnecessarily vague about the larger purpose of this subplot, and it's not clear to me why it was presented as a twist ending. Following early dialogue where Jae-chan suggests the possible existence of other soothsayers, I got the impression that story was contemporaneously about a new supporting character.

Actually, the real supporting characters of note here are teenage violonist prodigy Soo-yoon (played by Kim So-hyun) and Jae-chan's younger brother Soong-won (played by Shin Jae-ha). Their full story is quite sordid- but the dramatic beats are emotional rather than physical. Soo-yoon's problem is one that Jae-chan is, in theory, supposed to be able to solve as a prosecutor. Yet for various unfortunate societal reasons, Jae-chan is not as useful as he would like.

Chief among these problems is Yoo-beom, who has very quickly blossomed into the best villain I have seen in quite some time. He's a genuinely deplorable human being, but this fact is not obvious because he has fully perfected the art of rationalization and false humility. In his creepier moments Yoo-beom himself isn't aware of just how skeevy he is. The guy really does sincerely believe that Jae-chan holds a grudge, that Hong-joo is a bad girlfriend, and that Yoo-beom is blameless in all situations.

Given the inherently fantastical nature of the premise in "While You Were Sleeping - 2017", this comes off as logical- until we remember that Yoo-beom saw the guy right in front of the car's original trajectory, and is just choosing to ignore that. Likewise, Yoo-beom has no sense of moral ethics. As far as he's concerned, legal ethics are all that matter, and Lee Sang-yeob plays the guy like the hot shot main character in his own legal drama. Yoo-beom sincerely believes that he's the protagonist, which only makes his character all the more deplorable.

That's just one excellent quality of many on display here. Technical details about the way the prophecies work are on point. Emotional exposition about character relationships quickly makes our heroes quite engaging. The romantic comedy aspects are absolutely adorable. Suzy looks great with glasses and even better with a neck brace. There's even a compelling legal drama element buried in there- this whole production is just plain powerful.

"[HanCinema's Drama Review] "While You Were Sleeping - 2017" Episodes 3-4"
by HanCinema is licensed under a Creative Commons Attribution-Share Alike 3.0 Unported License.