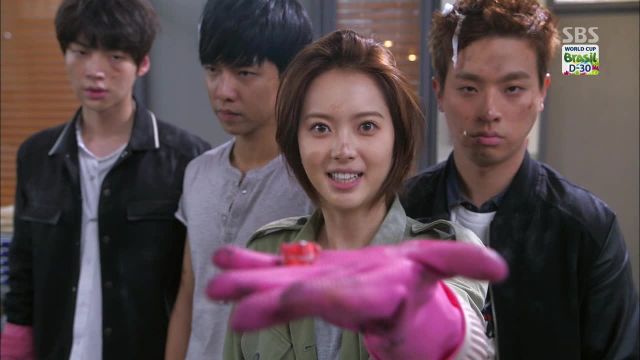 "You're Surrounded" is much stronger when it focuses on action and weak when it tries to be funny. There are a few laugh-out-loud moments, but most of the time the humor seems forced.

There is a running gag about Tae-il's beauty that constantly stops women (and men) in their tracks and has them admiring him. It works towards his advantage in investigations. It's a solid gag that works well. However, when the show tries to do group gags that mostly focus on slapstick, it goes overboard and stops being funny. The group humor lacks comedic timing while the individual incidents are much more amusing. If they had added the pickled baby from "Dr. JIN", the group scenes could've been funnier.

The serious aspects of the show turned out to be strongest in this episode. Pan-seok received a lot of reminders about his unsolved case from eleven years ago, the one where Dae-goo's mother was murdered. He still aches over that unsolved case and adds a depth to the arrogance that he shows at the station. Dae-goo's no-nonsense attitude and astounding memory is juxtaposed nicely with his rookie status. Although he has the ability to be a good detective, he doesn't have the experience nor the drive to look beyond the textbook. It is in this that his pairing with Soo-seon as his partner will prove beneficial. While she doesn't have his keen intelligence, Soo-seon has the compassion and desire to help others. A typical pairing made unique by the solid report by actors Lee Seung-gi and Go Ara.

The four rookies are split into their partner pairs and sent out to do their first solo detectiving. The tone differences between the two pairings are jarring. Ji Gook and Tae-il's case is portrayed in a specifically light hearted manner while Dae-goo and Soo-seon's case takes a dark turn. The focus on Dae-goo and Soo-seon's case is one I am glad of. There were a few humorous moments between them, but bulk of the case highlighted that their rookie status really is the problem that Pan-seok has been ranting about for three episodes. Inexperience leads to very dangerous mistak

"You're Surrounded" is entertaining, but mostly it has me wondering when it's going to come together and decide on the tone it wants to set. Currently, the tonal shifts are jarring and they detract from the juicier character and plot moments.


Written by Raine from Raine's Dichotomy