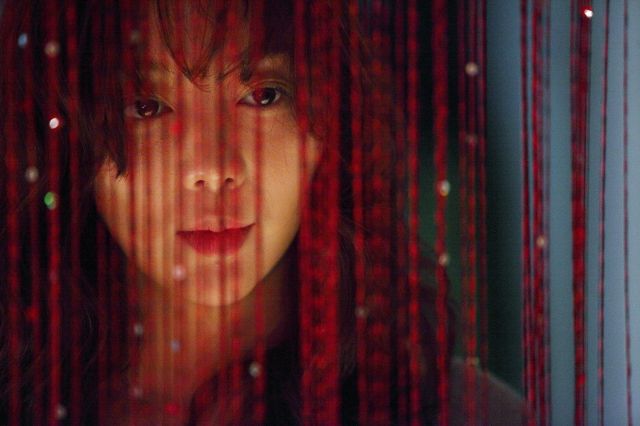 The title would probably be better transcribed as "Bitch ♥ Asshole", since just written out in words "Bitch Heart Asshole" gives the impression that this is a film about a random collection of swear words. Well, I suppose that's pretty accurate too. Here the work of writer / director Inan is very much an assault on the senses. The film's mostly just a test to see how much the viewer can stand watching a group of moderately unpleasant people doing moderately unpleasant things.

The titular bitch (played by Park Ran) spends most of her time standing around for no reason. Occasionally she sells her body for money, a process which doesn't look to be particularly fun at all. The titular asshole (played by Kwon Hyun-sang) is a street hustler, and not even a very good one, as he tends to resort to cursing and even violence when a business deal goes bad. Neither of our leads are well-suited for their work, yet their basic personality traits are negative enough that it's hard to feel too sorry for them having had a bad time of life.

It's actually rather telling that, by the time their romance finally starts up, it's not by relating to each other as people so much as objects. Not...sex objects, exactly. The bitch and the asshole treat each other like toys. Maybe pets would be a better example. It's a useful circumstance to view the apparently heartless denial that comes near the end. It's not that the bitch dislikes the asshole, it's just, would you want people to know that it's your dog who keeps taking a dump on everybody's yard?

The crude romance that makes up the foundation of "Bitch Heart Asshole" is the only thing making the movie almost pleasant. There's a somewhat refreshing lack of general pretentiousness in the sex scenes, even if the male gaze of Inan is just a tad too obvious. At best I was reminded of a similar scene in "Birdcage Inn", that elucidates the difference between when a prostitute has sex for money and when she has sex because she actually wants to have sex.

Even so, a few positive points and clear directorial intent can't really efface how "Bitch Heart Asshole" takes place in a generally grimy, grossly filtered, unpleasant world where the closest anybody can get to real joy is by going to take a jump in the lake. The film's not depressing, exactly, but it's not really uplifting either. While the movie's appeal is limited by the unpleasant nature of its characters, I can't exactly say it was ever misleading in any way. The title is "Bitch Heart Asshole" after all.

While I rather disliked actually watching the movie it's difficult to come up with anything about it that's specifically bad, boring, and pointless. "Bitch Heart Asshole" is the kind of movie that's deliberately bad, boring, and pointless because it's about the exploration of bad, boring, pointless lives. Certainly, an audience exists for this kind of coarse masochism. For those who don't fall in to that category, though, you're probably better of staying away from "Bitch Heart Asshole".