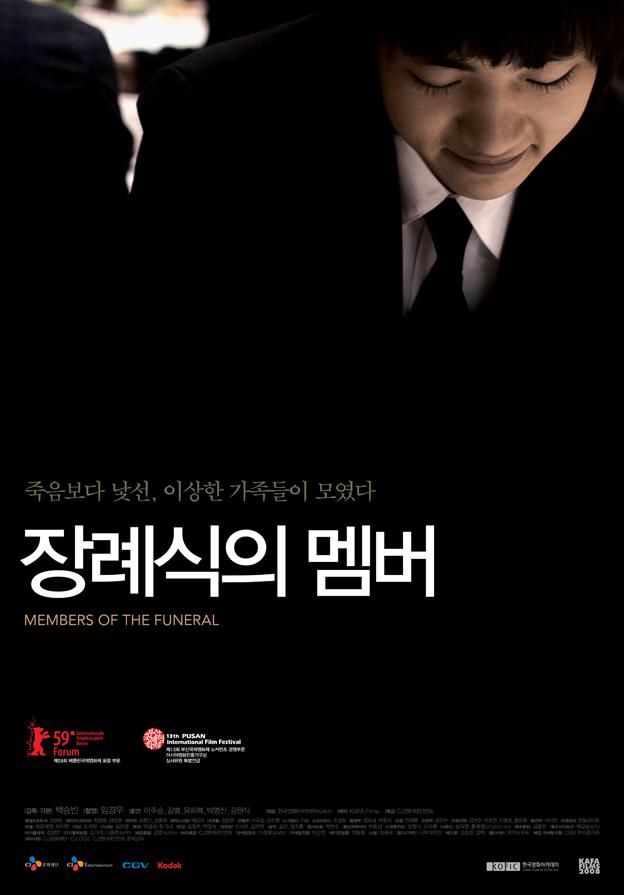 Hee-Joon (played by Lee Joo-seung) is a solitary young man. The son of deaf parents, he's used to not really paying attention to people. He's not really bullied or anything like that. It's just that most of the time he doesn't really see much of a point to it. However, by random chance, he ends up separately making close acquaintance with three members of the same family, who all sit together at Hae-Joon's funeral not discussing what kind of a person Hae-Joon was.

Members of the Funeral has a bizarrely meta narrative. A great deal of the film's focus is on a novel he writes over the course of the story titled "Members of the Funeral"- a story that appears to be based almost entirely on Hee-Joon's interactions with these same three family members. There is a great deal of ambiguity over how much of this film is actually what their relationships were like (as demonstrated in flashback) or are instead a part of Hee-Joon's novel (as narrated by Hee-Joon).

The gimmicky nature of this plot device gets weirder. The mother of the family, Jeong-Hee (played by Park Myung-shin) teaches composition. Her method is bleak and cruel, and even though she specifically asks to see Hae-Joon's novel, Jeong-Hee viciously attacks its faults. While it's easy to dismiss this technique as just being vindictive, most of the specific commentary (as opposed to the mean-spirited sentiment) is actually valid, useful criticism. There's a very direct attack against artistic attitudes relating to writing which stipulate that outrageous and real prose are what constitute valid storytelling.

This reaches a grotesquely ironic contrast when we detail Hee-Joon's relationship with Joon-Ki (played by Yoo Ha-bok), Jeong-Hee's husband. Joon-Ki is an athletic trainer who possibly has homosexual desires for some of his charges. It's not totally clear, given how it's difficult to tell which scenes are actually Joon-Ki, the novel Joon-Ki, or the audience simply assuming that Joon-Ki is gay because it's the least complicated and most artisticially cliched explanation for his motivation.

Their daughter, Ah-Mi, is the normal one of this family, and the only one who seems to take Hee-Joon at face value. This superficially seems a little absurd, given that she's obsessed with death, but Ah-Mi doesn't define herself in quirky gothic stereotypes. It's just a thing that she likes to do. The time she spends with Hae-Joon is particularly strange, since it is neither a story of love or coming-of-age. They just sort of hang out.

Members of the Funeral is an extremely dense film. It's difficult to keep track of everything that's going on, and it's very easy to miss important plot points unless the utmost attention is paid to what's happening on-screen. For the viewer with an introspective mood and the patience to follow the proceedings with close attention, Members of the Funeral offers a surprising reward, given how unclear and ambiguous so much of the story is. On that same note, only watch if you're prepared to do a lot of thinking. This is a film that goes out of its way to keep from giving us easy answers.

"[HanCinema's Film Review] "Members of the Funeral""
by HanCinema is licensed under a Creative Commons Attribution-Share Alike 3.0 Unported License.