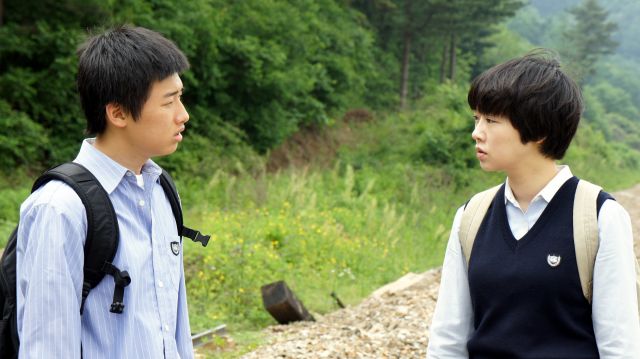 Did reading that give you a headache? If so, probably best to stay away from "Romance Joe". This is not only a film with the audacity to build an obscenely overlayered story, it's also pretentious enough to constantly remind the viewer that yes, this is an overlayered story. So much so that it's impossible to guess how much any of it is true, or at which point in the line the narrative starts to get unreliable.

Well, the ending more or less covers that. We find that one of the characters in the middle of the line actually has a clear vested interest in creating a narrative that the other person wants to hear, and will by necessity draw that vision from the limited tools available. "Romance Joe" might have been somewhat more tolerable as a movie if this mystery had actually been established from the get-go. In actual execution, most of the film just comes off as the big run-on sentence in the opening paragraph. We're constantly moving from one end of the story to another- there just isn't any point to it.

Romanticism plays a big part in the ideas "Romance Joe" is trying to communicate about storytelling as a medium. It's the only apparent reason for the main character's name. This ironically proves to be the film's own downfall, as exposing the flaws in the narrative construction mainly just serves to remind the viewer that no one in the movie is a real person that we can actually care about. At best they're kind of annoying. At worst they're discredited archetypes who would send a rather poor message to any young people watching.

But this is not a movie for young people. Director Lee Kwang-kuk has a clear audience in mind here- people who overthink stories and like messing around with the fundamental elements of narrative. The meticulous construction of the script and the clear eye for visual design make it difficult to hate this movie outright. There are few actual flaws in the film's construction.

"Romance Joe" is really a bit of a case study in how a film can be intelligent and achieve all its goals while still coming off as really frustrating. Practically any complaint about the characterization can be waved away by noting this is a deliberately constructed story so realism is not the focus- rather the illusion inherent in storytelling. And while this is a true and legitimate point, cleverness alone does not a good movie make.