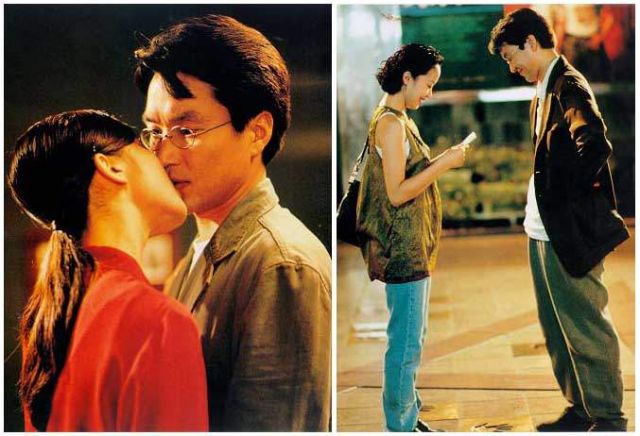 Produced at the cusp of the digital era, "The Contact" is a curious statement, not so much about digital relationships, but about the circumstances of modern life that seem to drive people toward these distant electronic connections. Dong-Hyeon (played by Han Suk-kyu) is a cool radio DJ whose smooth demeanor gives him plenty of pull with the ladies. And yet the event that sets off the story is his distant effort to see if a recent acquisition is actually some sort of secret message from an old lover.

A distant loneliness pervades most of this film. It's most obvious in the music- it's undeniable that these are quality riffs, exactly the kind of sound a distinguished intelligent thinker would like to listen to, as they demonstrate the subtlety and nuance of daily emotional life. The extrene pretensions in that sentence are deliberate- they mimic the superiority Dong-Gyeon feels to the world around him, which alienates him even as his main desire is to make a connection.

Take his constant interactions with Soo-Hyeon (played by Jeon Do-yeon). When they communicate throughout the distant abstraction of a nineties computer terminal, genuine emotion is inspired. But it practically becomes a running gag that there's none of this intimacy at all whenever they meet in person. Regardless of how often they meet each other, neither character takes these chance encounters as anything beyond mere coincidence. Even the camerawork takes on this aloofness.

It becomes a symbol of how much their distant attitudes are self-enforced by their own personal interactions and interpretations of the world around them. Neither character really gets that it's possible for a stranger to understand them. Dong-Hyeon even goes so far as to take this attitude with him when he deliberately goes on romantic adventures. The outcomes are predictable- always self-absorbed in his own viewpoint in the world, Dong-Hyeon inevitably sabotages these meetings by clearly becoming desperate for anyone- not just one specific person.

The main problem with "The Contact" is that the ending isn't entirely convincing. Neither character really solves this basic conflict within themselves- there's the glimmer of them finally realizing that this problem exists, but once that happens the film is over. For what it's worth, solving the problem, as opposed to just identifying it, might necessitate an entirely new narrative arc altogether, and I don't know that the film could be structured in such a way to accomplish both this and the general moody sensation created by the film's general music and atmosphere.

I could also say that the film doesn't deal with Soo-Hyeon as convincingly as it does with Dong-Hyeon- but that might be my own bias as a man speaking. "The Contact" is a film that thrives on its ability to build a connection between character and viewer, and this dichotomy will likely change from person-to-person. The main part of the film that doesn't leave itself up to that personal determination, the cinematography and music, are exceedingly well-done and may warrant watching on that basis alone. Just be forewarned that this is a very moody, reflective piece that may not necessarily take the viewer to an uplifting emotional zone.

"The Contact" is directed by Jang Yoon-hyeon and features Han Suk-kyu and Jeon Do-yeon.