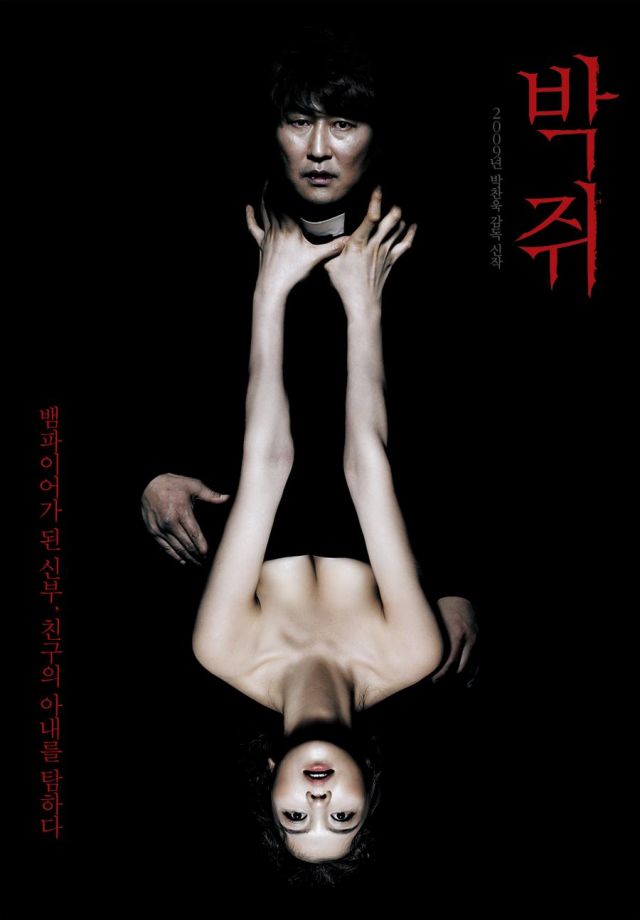 As I am sure most people did, I went into this film with high expectations of another gripping masterpiece by the critically acclaimed Park Chan-wook. Vampires? I was sceptical if Park's cinematic vision could transfer to the vampire genre to produce another deeply satisfying thrill ride.

Park's previous films offer fairly enigmatic storylines that ask the viewer to engage in his work actively. He likes to grab his audience early on and encourage them to be attentive spectators, engaging them in the celluloid spectacle like detectives. His dreamscape is one that draws on the darker side of humanity; he captures, exposes and expresses sensitive issues and taboos of society. He has humanised and dismissed prejudices surrounding perceptions of North Koreans in J.S.A ("JSA - Joint Security Area"), shown the futility of revenge as a purely human construct in his vengeance trilogy ("Sympathy for Mr. Vengeance", "Old Boy", "Sympathy for Lady Vengeance"), and tackled issues of identity and love in a postmodern world ("I'm a Cyborg, But That's OK). So what does he have in store for us this time around? Park has taken the motifs of vampire mythology and created a gem of a film. It still operates within the conventions of the genre but there is a freshness here that is sure to keep to you engaged.

The Story and Characters

Sang-hyeon (Song Kang-ho) is a deeply religious priest who volunteers to be a human guinea pig for a possible cure for the virulent virus EV, which only affects celibate men. Out of the fifty subjects, he is the only one who survives the infection. After receiving a life-saving blood transfusion, he finds himself to be a vampire and in need of a constant supply of human blood to sustain himself.

This is a fantastic premise - a religious priest forced to confront the unavoidable temptations of worldly pleasures. And how does our protagonist satisfy his new sinful cravings? Sang-hyeon drinks the blood of a coma victim, the recently deceased, and his supportive blind mentor. He is careful not to kill anyone to minimise the impact of his recent sins on his personal morality.

The temptation Sang-hyeon faces extends beyond simply subduing his bloodthirsty appetite. He breaks his vow of chastity with the troubled and beautiful Tae-joo (Kim Ok-vin). Tae-joo is Sang-hyeon's orphaned childhood friend who is unhappy with her married life. She wanders the streets at night to get away from her surly husband Kang-woo (Shin Ha-kyun) and his overbearing mother (Kim Hae-sook). Tricked into believing that Kang-woo frequently abuses Tae-joo, Sang-hyeon murders him to save her.  Their relationship then takes a violent turn when Sang-hyeon discovers that he has been manipulated. Struck with guilt after their scuffle, Sang-hyeon turns Tae-joo into a vampire. She, however, does not share Sang-hyeon's value of life or moral inclinations. Her blood-lusting rampages are too much for his conscience to handle and he must correct the mistake he has made.

The film is not as lavish or crafty as Park's previous projects, but its construction is still true to his established style and tone. The narrative is straightforward, clearly following a classic three-act structure. This was a little unexpected but Park still manages to engage the audience through symbolic representation and character conflicts, both of which are meaningful and compelling. As the priest fights to quell his thirst, his issues of morality and consequence is brought to a boil. His identity is threatened but his beliefs remain. When he introduces the impulsive and rash Tae-joo into his vampiric world of sin and indulgence, she is unwilling (or unable) to be as virtuous as he is. The final scene is probably my favourite in the film. This is where the film's themes and use of symbols beautifully come together. We are left in a state of contemplation as the sun rises up over the sea to bring the light, with no place to hide, no darkness to conceal, and no shoes to fill.

Please feel free to comment on this review. Discussions are welcomed.

Available on DVD and Blu-ray from Amazon and YesAsia