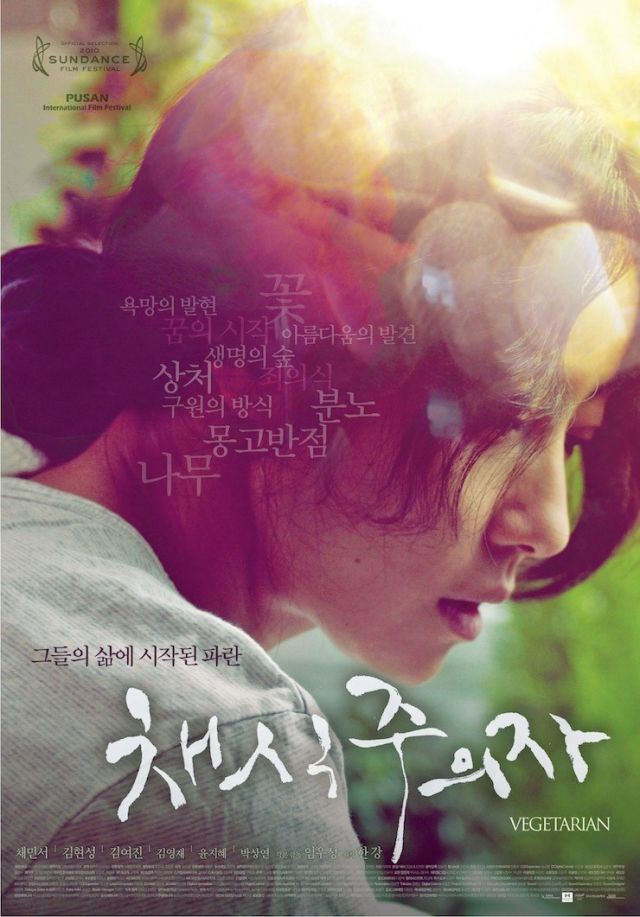 Lim Woo-seong's debut film "Vegetarian" had to compete at the Korean box office with the likes of "Secret Reunion" and the recorded breaking "Avatar" early last year. This low-budget psychological drama only managed a mere 3,145 admissions but scored an invitation to be screened at the 2010 Sundance Film Festival.

"Vegetarian" is based on a short story of the same name by Han-kang. A young married woman (Chae Min-seo as Yeong-hye) is plagued by dreams that result in a sudden obsession with becoming a vegetarian. Her husband soon divorces her and her well-being is left to her sister (Kim Yeo-jin as Ji-hye) and stepbrother (Hyun Sung playing the struggling artist Min-ho).

Yeong-hye's veganism is just the starting point as she drifts further from reality, ultimately believing that she is becoming a tree and requires only sunlight and water to exist. Her sister's concern is central to the story and she soon discovers that sending Min-ho to convince Yeong-hye to come live with them was a devastating mistake.

Ji-hye's husband is a struggling video artist who invites Yeong-hye to be the subject of his latest work. In which he paints her nude body with flowers and allows her to embrace her personal sense of transformation. His choice to do so has a profound effect on him and soon he cannot hold back on his own physical attraction to her. Ironically, in one of the scenes Min-ho brings in another man (Chae Min-seo's actual brother-in-law) to join Yeong-hye in his perverse and liberating video project. The man refuses and leaves when Min-ho requests that they have sex.

The film shines in a number of areas while falling short in others. I decided to watch this film purely out of interest and, while I don't regret it, I found it to have some major narrative flaws. There seemed to be almost an entire lack of a climax and as such I left felling unsatisfied and wanting. The film's story lacks closure and it is roughly spliced without offering reasons or appropriate cause.

That being said what I could appreciate is the film's efforts in creating a structural and thematic divide between a subjective and an objective understanding of this woman's experiences. Ji-hye deeply cares for sister's well-being but her inability to accept her sister's decision and actions ultimately compounds Yeong-hye's distress. Conversely, Min-ho engages Yeong-hye on a much more personal and accepting level. He acknowledges her feelings of transition and paints her with the world she most feels part of and, in doing so, demonstrates a phenomenological understanding of her as the subject of her own experiences as well as of his art.

"Vegetarian" is an interesting film, albeit a flawed one. Lim Woo-seong's has a great understanding of mood and composition but his grasp on narrative in this film was shaky and deterred from the overall impact of this film. I am excited to see what he can produce in his future films.