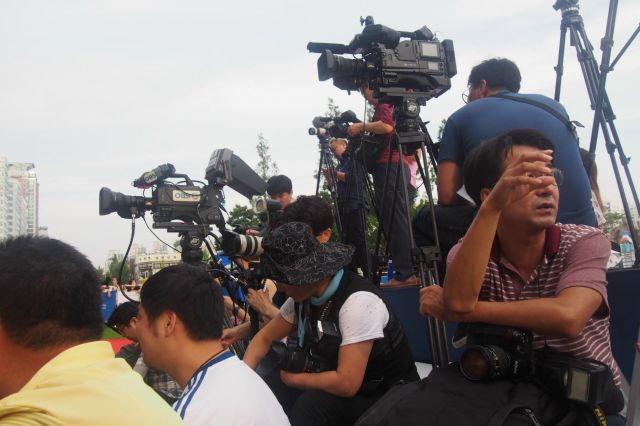 Ah, another year at the Bucheon International Film Festival (BiFan). This festival will always have soft spot in my heart, because they were the first to recognize my press credential way back when I started writing for HanCinema full time. This was the first year I tried to use that credential to take pictures instead of just watching movies. In commemoration of that, I present the more obscure side of Bucheon red carpet. Most of the people who walk the red carpet don't show up in articles, even if they all have their own interesting story to tell. 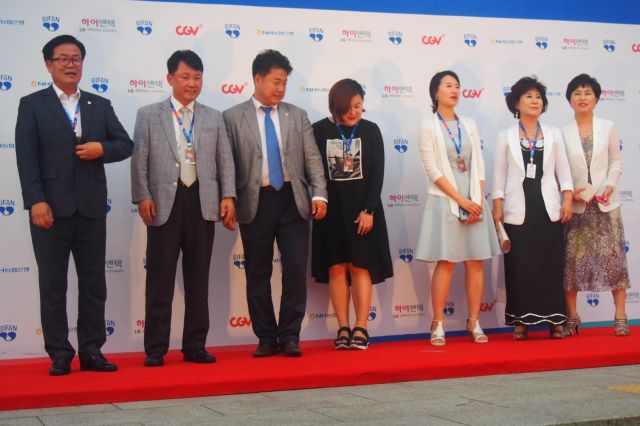 These are various members of the Bucheon City Council. In contrast to Busan, where the relationship between BIFF and the city has grown increasingly agrimonious, BiFan enjoys an effective partnership with the city of Bucheon. It's one of the reasons why the festival is so well run. At the opening ceremony a big point was made about how the city of Bucheon readily agreed to grant BiFan more official independence, since BiFan has been a big boon to the city at large. 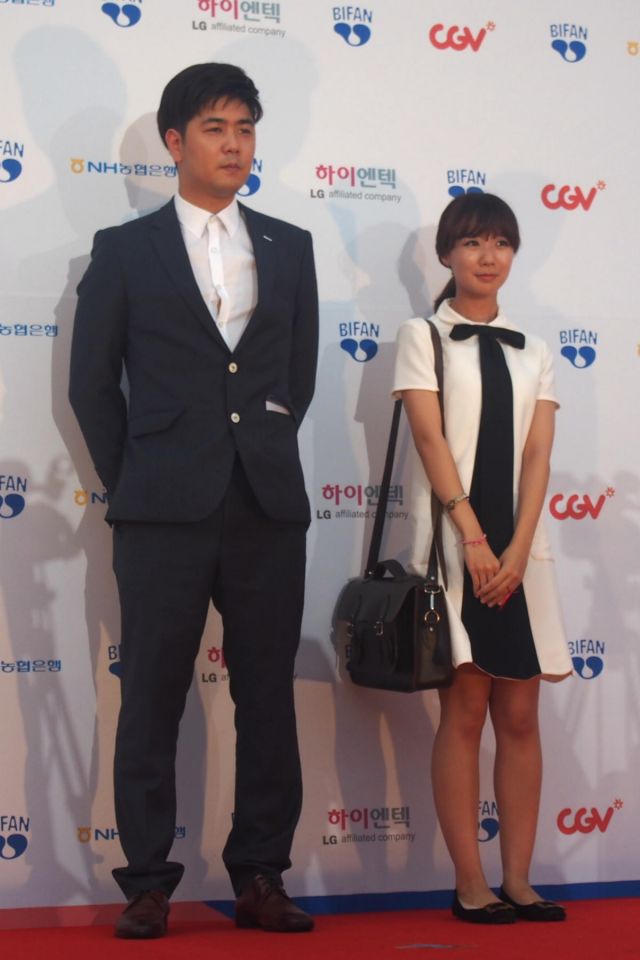 These are directors Kim Min-jae-II and Kim Hye-yeong. They aren't famous- but their short movies were featured in the short films sections, which are always worth watching just for the variety. Kim Min-jae-II, on the left, made Hyperbolic Time Chamber, which is mostly just an extended wind-up to an impossible to translate Dragon Ball Z pun. Kim Hye-yeong, on the right, made a similarly culture specific movie about a couple of women who "fight" each other by making videos of themselves eating a lot of food. Hey, it's a fantastic film festival. Weird is good. 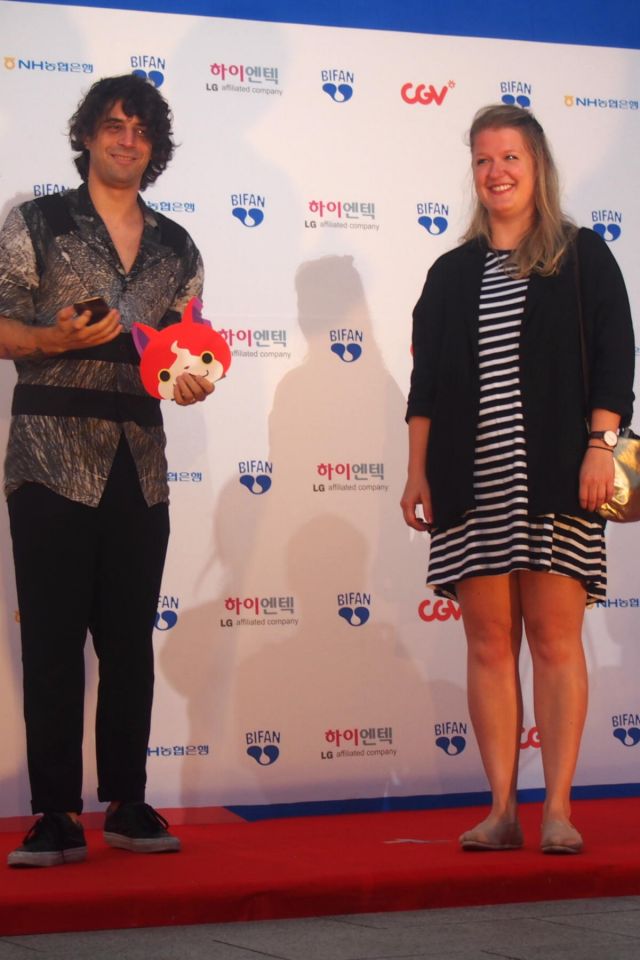 The man on the right is Turkish director Can Evrenol, who made a horror movie called Baskin. Also he's holding a Yokai Watch fan, I'm guessing due to amusement over its cartoonish appearance. 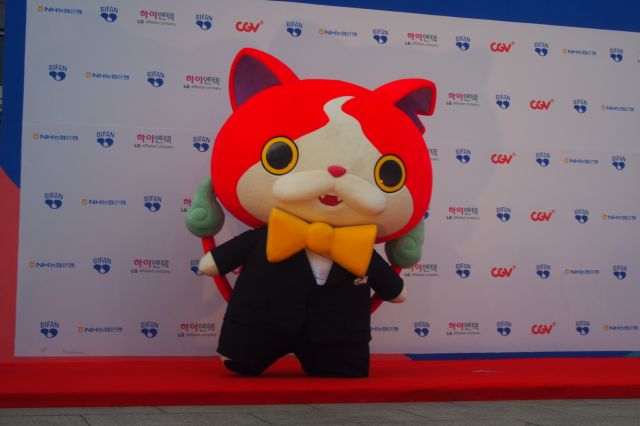 Also some poor short person danced around in this Jibanyan costume for our general amusement. This was to promote the new Yokai Watch movie, which played at the festival. 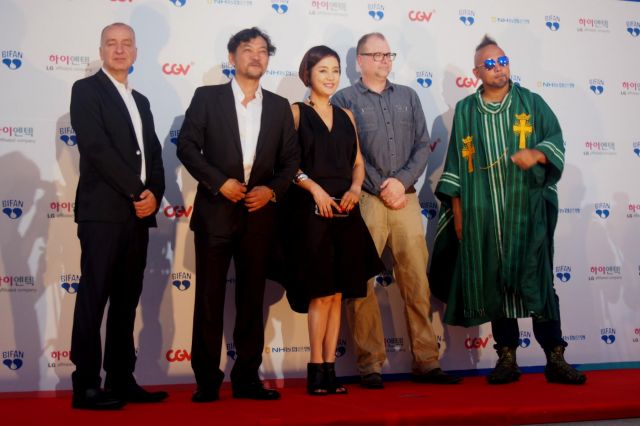 This is the Bucheon Choice jury, which awarded high marks to "The Wailing". They also gave out the Jury Award to Under the Shadow, an Iranian film which I did not see, but which I have been told was quite scary indeed. 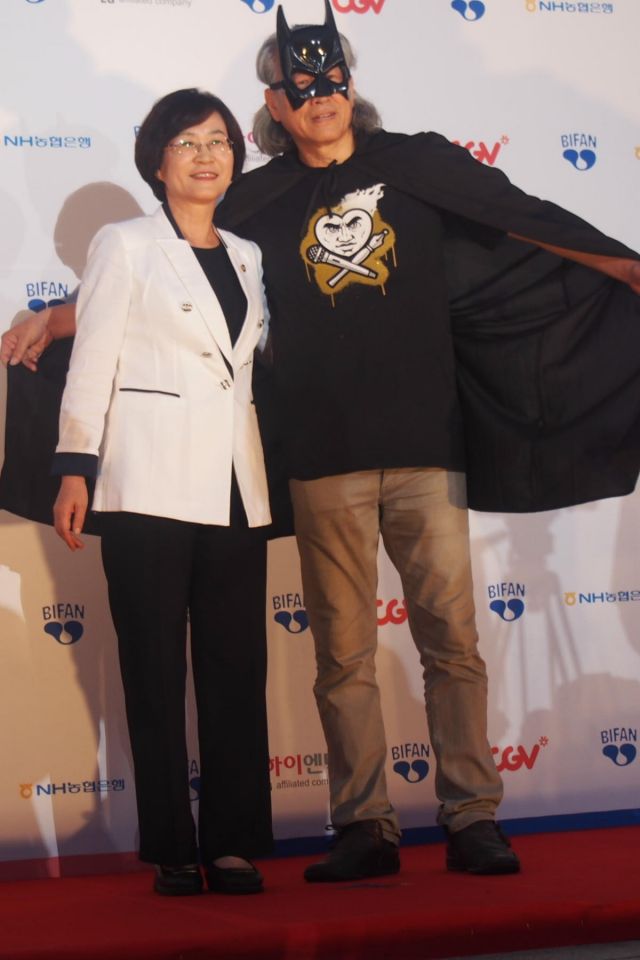 The peculiar man with the Batman cowl is Park Jae-dong, the director of the Bucheon International Comics Festival, which this year was concurrent with much of BiFan. The city of Bucheon made a point of scheduling a lot of events in tandem this year so as to maximize potential output. 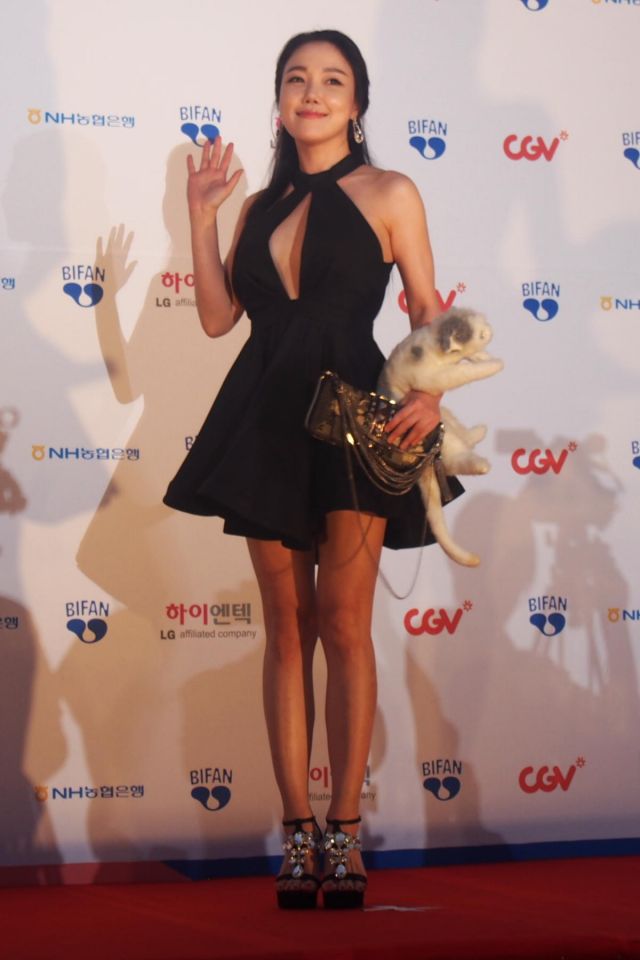 This is pop artist Nancy Lang. Her chief gimmick is that she carries a stuffed cat around everywhere. I recognized her because she was in the tvN reality show The Genius for a spell. It was unclear to me why she was on the red carpet. 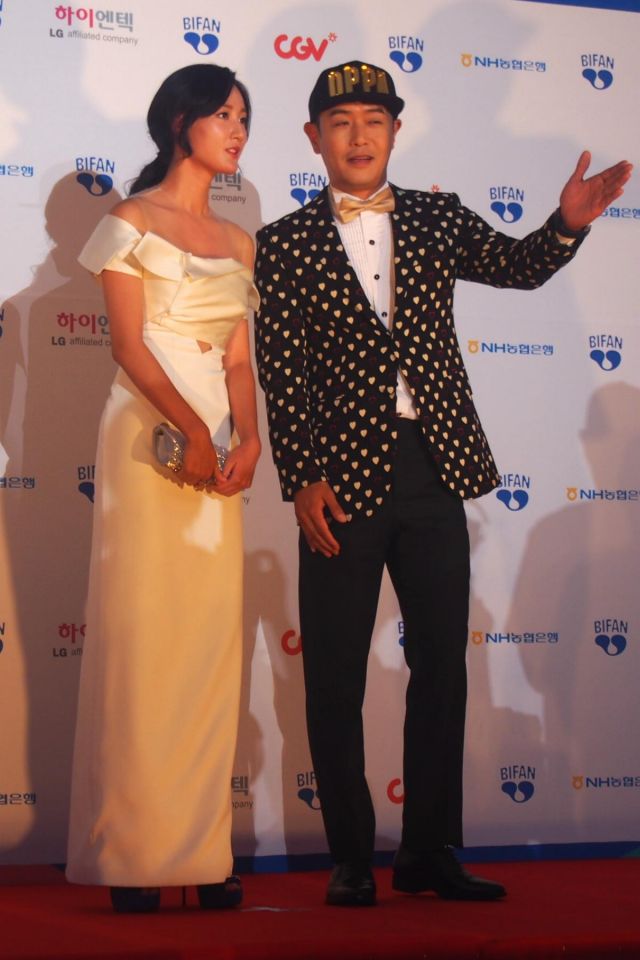 The man on the right is comedian Kim Dae-hee, who recently made a movie that did not appear at Bucheon nor has it been released in South Korea at large. It's some sort of Chinese co-production, and I guess that was enough to get him on the red carpet.

Beyond that it was mostly what could be expected from the opening ceremony of a major international film festival. There were big crowds.

Speeches and performances abounded, most of which amounted to how great it was that the festival was here, and won't you enjoy the show? Also it was fairly dark. 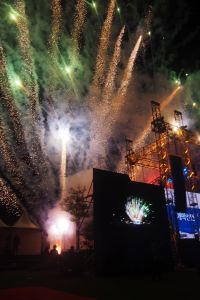 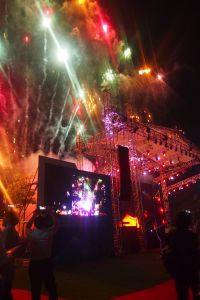 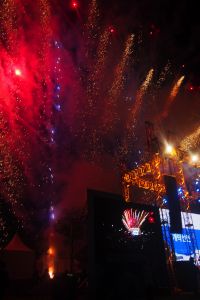 ...Which is why pyrotechnics were a popular order of the day. But that's all just the flash of the opening. Next time I'll get into more of the nuances.