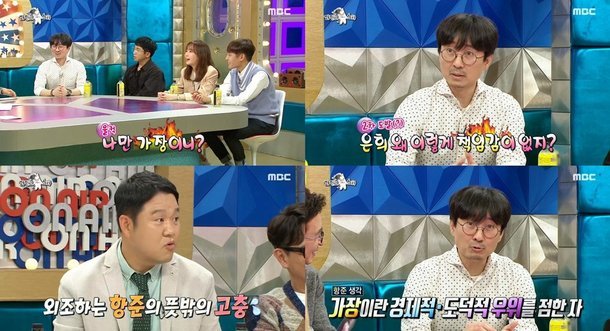 Director Jang Hang-jun appeared on the most recent episode of the variety talk show 'Radio Star' as a guest. On the show he talked about his wife, screenwriter Kim Eun-hee-I, and how he has had to take the lead on housework lately because she's been exhausted from working on "Kingdom - Season 2".

Jang Hang-jun discusses their relationship in a comically bickering fashion, with him resisting her attempts to put responsibility on him, to which he eventually acquiesces. He then describes how he made dinner in the form of bean paste stew while then having to yell after her to ask when she's going to come eat. Jang Hang-jun describes Kim Eun-hee-I as being the boss of the household, as she is the more competitive and scrupulous of the two.

Jang Hang-jun met Kim Eun-hee-I in 1997 while the two were working as writers on a variety show, Jang Hang-jun being three years her senior there. They married in 1998 and have one daughter together. Jang Hang-jun's last movie was "Forgotten" starring Kang Ha-neul and Kim Moo-yul.