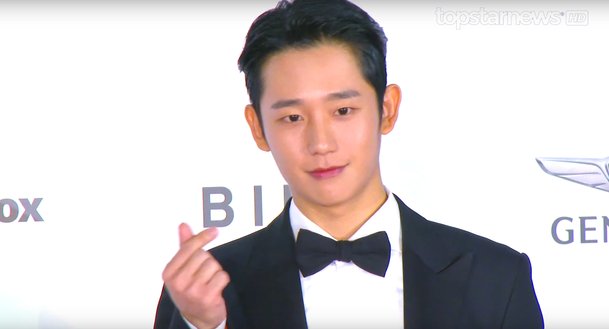 Actor Jung Hae-in has been back in the spotlight lately, as he walked the red carpet at the Busan International Film Festival on October 3rd. He came to the festival because it was screening his recent film "Tune in for Love", where Jung Hae-in co-starred with Kim Go-eun as a couple who keeps getting separated by time and tide.

The very next day on October 4th he had to go to Taiwan to participate in the Grand Bell Awards in that country. Following that sojourn, he returned back to South Korea on October 6th. And now, following that recovery, he is set to appear at the Busan International Film Festival again on October 9th on the large stage to give a stage greeting to filmgoers. He will also do a guest visit that same evening. Fans have been camping out at the BIFF ticket office to ensure they get tickets for this event.

Once his BIFF commitments are over Jung Hae-in will go right back to Taiwan again for a fan meeting on October 12th entitled One Summer Night. In this way Jung Hae-in's willingness to travel is admirable, constantly moving between Seoul, Busan, and Taipei.

"[HanCinema's News] Jung Hae-in Has Been Keeping Busy"
by HanCinema is licensed under a Creative Commons Attribution-Share Alike 3.0 Unported License.