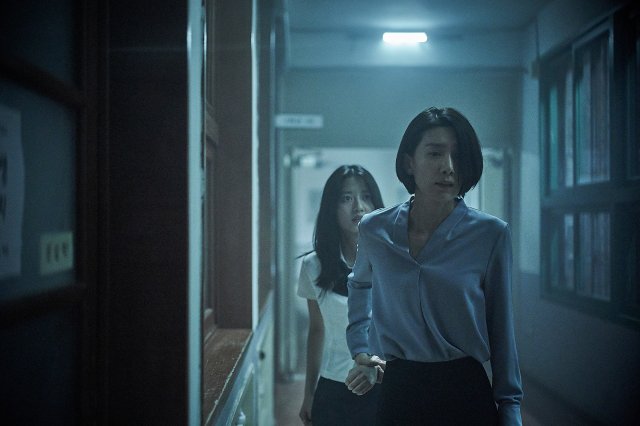 The English subtitle for "Whispering Corridors 6: The Humming" differs substantially from the Korean one, which means alma mater. See, vice-principal Eun-hee (played by Kim Seo-hyung) has come back to work at the same Gwangju girls' high school she once attended. The implication thus being, that somewhere in Eun-hee's backstory there might be an explanation of what the deal is with that creepy ghost in the unlocked basement.

You'd think that the janitor might make a better effort to lock the doors to keep the kids out of the basement, given that it's dark, filthy, and dangerous. Then again the janitor does apparently die in the opening scene, killed by a malicious window. Or was that Eun-hee's predecessor as vice principal? Either way Sae Bich High School (yes, it's actually written like that in English in the movie) is badly overdue for a visit from the occupational safety inspector.

But then, someone expressing any serious interest in the constant death at this school would get in the way of the actual plot, or what little story we have that passes for a plot. For awhile the apparent plot hook of a sexual assault is played off with such low energy I was wondering whether token male teacher Yeon-mok (played by Jang Won-hyung) would be vindicated, with his story of mixed up teen girls wanting attention being a cover story for something more interesting.

You'd certainly think a story about a teacher sexually assaulting a student would be good grist for a horror movie, yet somehow "Whispering Corridors 6: The Humming" makes it all exceedingly dull. Kim Hyun-soo is nearly unrecognizable from her dynamic turn on "The Penthouse" just featuring the young actress looking really bored most of the time. Even the horror movie moments just aren't scary, with writer/director Lee Mi-young-II relying far too hard on above average makeup and set design to set the mood.

I should also note for clarity that the only particularly good set design is in the basement. Everywhere else in the school just looks pointlessly bleak and drab, with Lee Mi-young-II repeatedly doing doing staircase shots just because they somewhat decrease the monotony. While she certainly succeeds in making the school look like a lonely place, the characters are too wooden to evoke much sympathy. I was the main person feeling lonely, impatiently wondering when exactly this story to nowhere was going to end.

Then the climax comes, in pretty fantastically bad taste, finally giving a reason as to why this movie was shot in Gwangju aside from the tax benefits. "Whispering Corridors 6: The Humming" ultimately ended up reminding me of "The Chosen: Forbidden Cave" of all ridiculous things, another alleged horror movie that attempted to compensate for lackluster characterization with socially conscious plot twists. At one point I was rooting for a villain to die not because I cared about his victims, but just because he was incredibly annoying. There's no craft at work in "Whispering Corridors 6: The Humming" or even any particularly interesting ideas. The whole project is just weirdly obligatory.