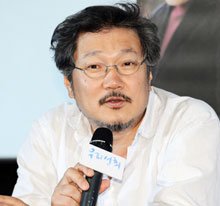 Hong Sang-soo told local reporters on Tuesday that he was thrilled to have collected the Best Director Award at the 66th Locarno International Film Festival in Switzerland for "Our Sunhi".

Speaking at a theater in Seoul, he said, "I wasn't expecting it, because it all depended on the Jury's decision. I was happy to win the award and celebrate it with the actors and crew".

The film, Hong's 15th to date, revolves around the main female protagonist and three men who are romantically interested in her. After its screening at Locarno, critics described it as one of the most beautiful films to appear at this year's festival.