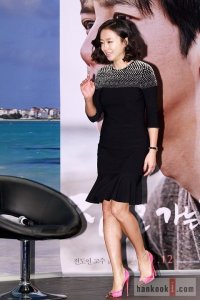 Jeon won the prestigious award for her portrayal of a traumatized woman in Lee Chang-dong's "Secret Sunshine" (2007). For her 11th film, the 34-year-old has chosen the role of a jobless, lover-less woman in her 30s who spends a strange day with her ex-boyfriend. The male lead is yet to be cast.

Director Lee is well known for his critically acclaimed piece "This Charming Girl" (2005).

"I am happy to be able to work with the chameleon-like actress", Lee was quoted as saying according to Bom Film Productions, which also produced Jeon's previous works "Untold Scandal" (2003) and "You are my Sunshine" (2005).

"Meotjin Haru" ("My Dear Enemy") is scheduled to go into production this November for release early next year.