K-pop idols to perform at summer concert next month 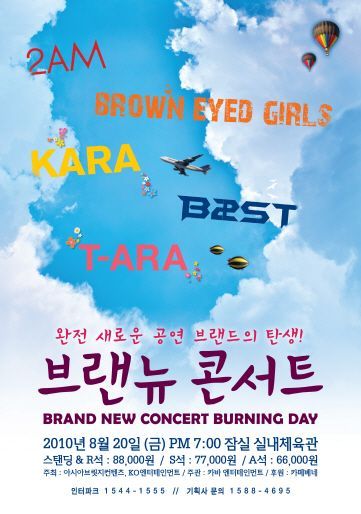 A number of Korean idols are set to perform at a summer concert in August, according to the concert's promoter Asia Bridge Contents on Friday.

Asia Bridge Contents announced in a press release that K-pop groups 2AM, Brown Eyed Girls, BEAST, Kara and T-ara will take to the stage of the "Brand New Concert - Burning Day!!" to be held at the Olympic Park Stadium in Seoul on August 20.

Part of the proceeds from the concert will be donated to a foundation for children with cancer.

Popular boy band 2AM, composed of members Jo Kwon, Lee Changmin, Im Seulong and Jeong Jinwoon, is managed by major talenthouse JYP Entertainment. They made their debut in 2008 with their debut single "This Song" and released their first full-length album "I Can't Let You Got" in March.

Brown Eyed Girls, composed of leader Jea, rapper Miryo and vocals Narsha and Gain. Having released a total of three studio albums and two mini-album, the four-member group has been one of the most successful female groups in Korea since their debut in 2006. Their song "Abracadabra" was a sensational hit in the country last year.

Six-member boy band BEAST splashed onto the music scene in October 2009 with their mini-album "Beast Is the B2ST". They have several hit singles under their belt including "Bad Girl", "Shock" and "Easy". The group is currently visiting several Asian countries to promote their singing careers.

Kara, composed of members Han Seung-yeon, Nicole, Kang Ji-young, Park Gyu-lee and Gu Hara, made their debut in 2007 and have released several singles and albums which include their hit songs "Pretty Girl" and "Wanna". They will be releasing their Japanese debut single album "Mister" next month.

T-ara, originally a six-member group who recently added a new member, made their debut in July 2009 with their single " Lie " and "Wanna Play". In December 2009, they released their first studio album "Absolute First Album" which produced two hit songs "Bo Peep Bo Peep" and "I Go Crazy Because Of You".

Tickets for the summer concert are available online at reservation site Interpark (www.interpark.co.kr).

"K-pop idols to perform at summer concert next month"
by HanCinema is licensed under a Creative Commons Attribution-Share Alike 3.0 Unported License.
Based on a work from this source