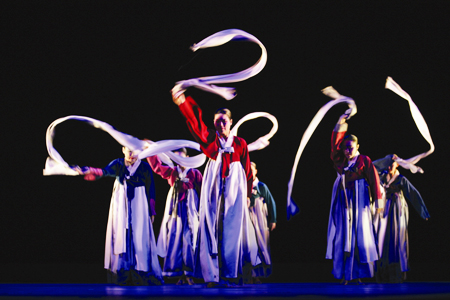 Yeajon Dance Company, led by Son Kyung-soon, perfoms "Shin-Sal-Pu-Ri". The troupe kicked off a tour in New Delhi, Thursday, and will continue performing in Chennai on Sunday as part of an arts exchange with India.
/ Courtesy of Korea Foundation

A Korean dance troupe led by one of the country's so-called "human treasures" has set off to share local traditions in India this week.

Under the leadership of esteemed artist Son Kyung-soon, Yeajon Dance Company kicked off its tour in New Delhi on Thursday and will continue onto Chennai for a second show on Sunday.

The program is designed to introduce Indian audiences to various dances including intangible cultural assets. Korea has a unique cultural heritage listing system for recognizing intangible skills that have been passed on through the generations, such as "Salpuri"and "Seungmu".

Son is a holder of intangible cultural assets in dance and professor of dance at Soongeui Women's College. Her troupe, comprised of Soongeui alumnae, has previously toured other countries including Australia. The company brings a showcase of folk, religious and court dances to India.

"We have done our best to present pieces that are easy to understand yet of the highest caliber", said Son. "Whenever I go abroad for a performance, I am a jumble of emotions: excitement to show Korea's traditional dance to new people, pressure to perform well, and concern about the audience's response".

The program includes the festive fan dance, the Buddhism-inspired "Seungmu" as well as "Yeon-Wha-Dae-Mu", which features graceful choreography originally performed for Joseon kings.

Also being showcased are more dynamic sequences such as "Shin-Sal-Pu-Ri", a creative modern twist on the shamanistic ritual.

The performances allow the viewer to hear "gugak" (traditional Korean music) not only in the background score but also on center stage. In "Sul-Jang-Gu-Chum", which originates from agricultural folk culture, female dancers play the hourglass-shaped double drum "janggo" strapped onto their wastes while showing off moves.

The event co-organized by the Korea Foundation and the Indian Council for Cultural Relations (ICCR) comes in time for "The Year of Korea in India/India in Korea".

"We signed an MOU (memorandum of understanding) with the ICCR and it is very meaningful to have artists from both sides perform in the other's country", said the Korea Foundation in a statement.

"Korean traditional dancers tour India"
by HanCinema is licensed under a Creative Commons Attribution-Share Alike 3.0 Unported License.
Based on a work from this source