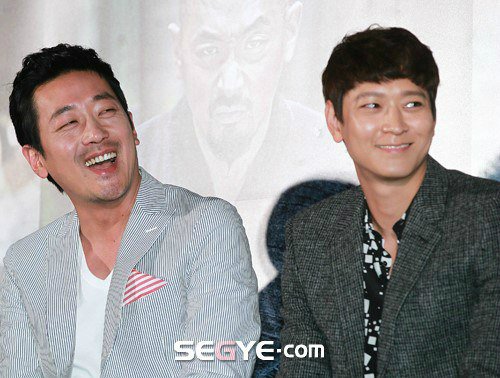 About working with Ha Jung-woo, Gang Dong-won said, "He is very relaxed and carefree on the set. It's something I should learn and also, he's so good a leading everyone".

About Gang Dong-won having some difficulties in filming this movie for the first time in 4 years, Ha Jung-woo responded, "I didn't sense he was suffering. He's Gang Dong-won indeed".

Ha Jung-woo stated, "Gang Dong-won is attractive in front of the camera but he's even more when the cameras are turned off. He always speaks to his seniors first about what's on his mind and that was surprising to me. I was impressed by him, it's beyond what I expected".

""KUNDO" Ha Jung-woo and Gang Dong-won"
by HanCinema is licensed under a Creative Commons Attribution-Share Alike 3.0 Unported License.
Based on a work from this source