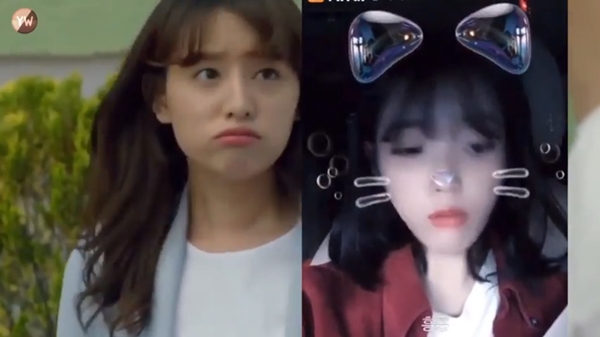 In South Korea, a certain photo editing/drama dubbing app, Kwai (click for android and here for iphone), for smartphone has become very popular recently. This app has various scenarios of drama lines and you can record yourself lip-syncing to it and put cute filters to enhance your video.

Along with many people who use this app, many stars have also become a fan of this app including Suzy, Lee Soohyun, Sulli, and IU. These stars have uploaded their short dubbing videos on their SNS account using this app and of them, the latest video of IU went viral.

On the 24th, IU posted a video of her dubbing the line of Choi Ae-ra (played by Kim Ji-won) from the drama, "Fight My Way". The actual scene itself became viral when the drama was being aired, due to the lovely aegyo displayed by actress Kim Ji-won and this time, IU has killed it as well!

Watch her adorableness for yourself below!

And here's a comparison of the original version vs. IU version.

I tried to figure out who did better, but it was a tough decision. Ah, Kim Ji-won and IU, you two are both MVPs in my heart!

"[Lily's Take] IU's "Fight My Way" Dubbing Video Goes Viral"
by HanCinema is licensed under a Creative Commons Attribution-Share Alike 3.0 Unported License.
Based on a work from this source