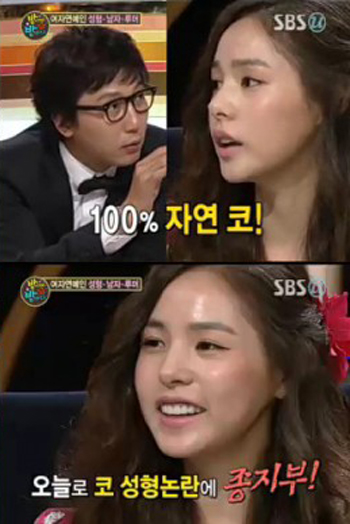 Actress Min Hyo-rin spoke about the rumors about her nose.

She appeared in the SBS TV program "Every Night" on the 4th and started her story saying, "My management director came up to me on the streets one day and without even asking my name or age just suddenly asked when I had my nose done".

"I really didn't do my nose. It is 100% natural. I had my eyes done and had my teeth laminated because my management chairman recommended it".

Along with Min Hyo-rin's bold confession, singer Kang Soo-ji also confessed about her surgery. She said, "When I first came out, I mostly didn't do anything. I went and did it all on my own".

Meanwhile, IU caused laughter in the studio saying, "I wanted to get a nose job so I went to the plastic surgeon before I made my debut, but the doctor said my skin was too thin and would only be able to raise 1mm".

"Min Hyo-rin "My nose is 100% natural, just my eyes and teeth""
by HanCinema is licensed under a Creative Commons Attribution-Share Alike 3.0 Unported License.
Based on a work from this source