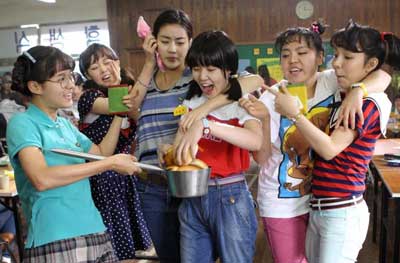 Holding the record for the biggest sucess in Korean movies yet with a number of 7 million, the director's cut will be an extra 10 minutes. It will be released on the 28th in 30 or so cinema's all over the country.

"Sunny - 2010" had to re-edited or cut off in parts where there were swearing or violence but it will be revived according to director Kang Hyeong-cheol's intentions.

The preview for the director's cut showed the director on site, the last shooting of the movie and the joyful moments of the seven princess' in "Sunny - 2010". It was made in the graphic design concept like in the 1960s "Saul Bass" poster.

"Movie Sunny director's cut released on the 28th "
by HanCinema is licensed under a Creative Commons Attribution-Share Alike 3.0 Unported License.
Based on a work from this source