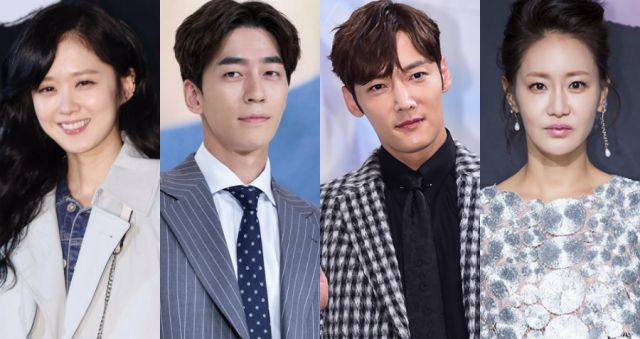 According to coverage by jTBC, previously courted Jang Nara, Shin Sung-rok, Choi Jin-hyuk and Shin Eun-kyung have been confirmed to join "The Last Empress"; a "Princess Hours"-like story about a modern day monarchy, but with a more sinister twist. JTBC has information on the premise and the leads, but I'll return with more on the supporting cast next week.

"The Last Empress" is said to take place in an alternate reality 2018, where the country is a constitutional monarchy. It tells the story of a cheerful musical actress who becomes the nation's Cinderella overnight after marrying the emperor. The drama follows her efforts to find happiness and true love, while fighting against the palace's absolute power, and trying to find the truth behind the grand royal empress dowager's murder in order to overthrow the imperial rule. Goodness, is she going to be one busy woman.

Jang Nara is up for the busy heroine, Oh Sunny, a musical actress whose dream has been to lead musicals for the rest of her days, but who in reality is just an understudy shunned by directors. One day she turns from a no-name musical actress to an empress, making her the nation's Cinderella.

Shin Sung-rok plays emperor Lee Hyeok, the head of this new Korean Empire. Having revived more than 30 imperial companies, and amassed great wealth, he is a talented man who is also good at controlling others. He is a handsome, eloquent individual.

Choi Jin-hyuk plays Na Wang-sik, the hulking, 120kg imperial guard. He is a rough-talking scoundrel of a man with a habit of bullying his henchmen. He's a formidable foe in battle, as he is fast despite his size, and has an innate affinity for winning.

Shin Eun-kyung will be the empress dowager, Lee Hyeok's mother. Although she is a loving mother to her emperor son, she is a fierce mother-in-law to her daughter-in-law. She is a queen bee nicknamed "blade woman" due to being fearless and holding absolute power over the empire, while she is a natural enemy to the grand royal empress dowager, meaning the emperor's grandmother. The empress dowager's affection for her son is almost at an obsessive level.

Writing the drama is Kim Soon-ok ("Sister is Alive", "My Daughter, Geum Sa-Wol"",Temptation of Wife"), joined by PD Joo Dong-min ("Return", "Yeong-joo", "Take Care of Us, Captain") on the helm. The creators and the premise don't personally interest me, but any story is definitely in good hands with this lovely cast. "The Last Empress" is scheduled to air in November, on SBS.