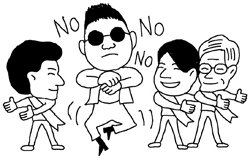 Psy's global hit "Gangnam Style" has spread into politics. Already some of the presidential hopefuls have either been spotted doing the singer's signature horse-riding dance or their camps have aped the music video at political events.

"We've had no official requests from any presidential candidate to use 'Gangnam Style' as their campaign song, but there have been unofficial requests", said one source close to Psy. There appears to be very little chance that the song will be blaring out of speakers behind a particular presidential candidate's podium any time soon because Psy has stated clearly several times that he would not allow it to be used.

"There's no chance that we're going to allow 'Gangnam Style' to be used for any political purpose. Presidential candidates are probably well aware of this, and that's why we've had no official requests", the source said.

People in the music industry say that Psy, who has become a national hero, would not want to become embroiled in any political scandal.

But the copyright holders to several other songs are apparently waiting for their tunes to be picked up by a candidate during this presidential election. A staffer at the Korea Music Copyright Association said, "People in the industry seem to feel that election season usually promises handsome profits. Every election season, we get a lot of requests from composers and lyricists whether their songs can be publicized through political campaigns".

It is quite simple to use a particular song as a rallying tune. Political groups simply need to submit the necessary documents to KMCA and pay a small usage fee. They also need to submit a document proving they have permission from the copyright holder.