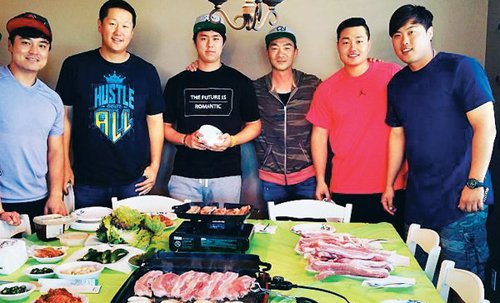 This photo from the Instagram account of Ryu Hyun-jin of the Los Angeles Dodgers shows Korean Baseball players at a party hosted by Ryu at his home in Glendale, Arizona on Tuesday. From left, Choo Shin-soo of the Texas Rangers, Lee Dae-ho of the Seattle Mariners, Kwon Kwang-min of the Chicago Cubs, Kim Tae-hyung, an interpreter for Ryu, Choi Ji-man of the Los Angeles Angels and Ryu

Ryu Hyun-jin of the Los Angeles Dodgers in Major League Baseball threw a party for fellow Korean baseball players at his home in Glendale, Arizona on Tuesday.

The invited players were Choo Shin-soo of the Texas Rangers, Lee Dae-ho of the Seattle Mariners, Choi Ji-man of the Los Angeles Angels and Kwon Kwang-min of the Chicago Cubs, all of whom are currently in Arizona for spring training.

Ryu uploaded a photo of a table full of pork belly and vegetables on his Instagram account.

Ryu, who missed the entire 2015 season due to a shoulder injury, had his second bullpen session on Monday. He threw 30 fastball pitches to check on his shoulder.

Dave Roberts, the new manager of the Dodgers, told reporters on Tuesday that Ryu felt soreness after the bullpen session, but it is "normal soreness" you feel after exercising. The Dodgers will decide whether to increase the intensity of Ryu's rehabilitation program after watching his progress for a while.

Meanwhile, Kang Jung-ho, an infielder for the Pittsburgh Pirates whose debut season ended prematurely due to a rough tackle in September last year, had his first day of spring training in Bradenton, Florida on Wednesday.

He did most of the training routines, suggesting he will be able to get back to his form soon.