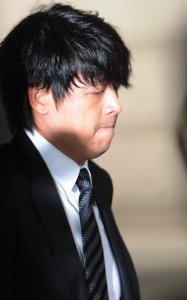 The actor Ryu Si-won (36), who is currently working in Japan, was selected as the best 'ideal boyfriend' in a recent survey.

On a weekly entertainment survey conducted by the Japanese newspaper, Yomiyuri, Ryu Si-won was ranked 1st place under a category of 'The actor most women wish to date'. The answerers responded that 'His smiles comforting the mind's agony', 'He does everything to his best and is well-mannered' and 'I'm studying Korean to have a conversation with him'.

His agency, Ars. Co. said, "Ryu Si-won's official 5th album will be released in Japan on May and he's going to have a 3-months-long national tour concerts from June".

"Ryu Si-won, the 'best ideal boyfriend' in Japan"
by HanCinema is licensed under a Creative Commons Attribution-Share Alike 3.0 Unported License.
Based on a work from this source