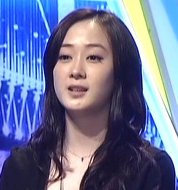 Korean-American singer Joanne died Tuesday of injuries sustained in a car accident in the U.S. She had been in a coma since Nov. 26.

She debuted here back in 2001 at the age of 14 and enjoyed some success as a rising star. But she quit showbiz due to conflicts with her agency just a couple of years later.

Joanne tried to make a comeback in 2012 by appearing on the reality show "Superstar K" on cable channel Mnet, but was unsuccessful.

"Singer Joanne Dies After Car Accident in U.S."
by HanCinema is licensed under a Creative Commons Attribution-Share Alike 3.0 Unported License.
Based on a work from this source