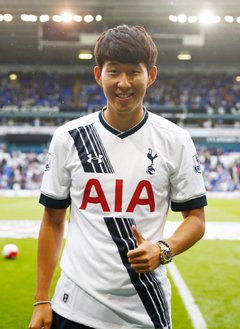 Son Heung-min, who recently transferred to Tottenham Hotspur, is set to make his English Premier League debut this weekend.

The London side announced on its website Wednesday that Son had been granted a work permit to play in England, finalizing the paperwork for his transfer from Bayer Leverkusen. Son is expected to play against Sunderland on Sunday.

Tottenham has gotten off to a terrible start this season, currently sitting in 16th place out of 20 teams after three draws and a loss.

Son's quick feet and goal-scoring abilities should liven up the atmosphere at Tottenham, which has managed just three goals in four matches. Harry Kane, whose tally of 21 goals was the second best in the league last season, has been silent.

Son scored a hat trick in a match against Laos last week in the Asian qualifiers for the 2018 World Cup in Russia.

He skipped a match against Lebanon early this week and returned to England to rest, so he should have no fitness problems.